The Sound of the Turkish Slap Should Be Heard from Tehran 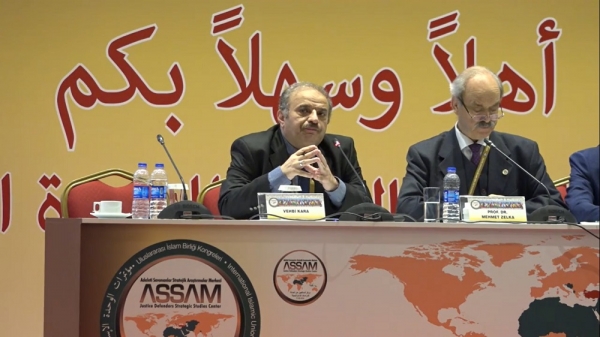 In Syria, first 8 and now 5 of our soldiers were martyred. Of course, the punishment for this will be given by our heroic army. To achieve this, we should not rush and respond with a weak operation. Because we must teach those who carry out these treacherous attacks on our soldiers that these attacks have heavy cost.

Because any enemy who fire guns against our soldier should know that; Turkey will destroy those who shed the blood of our soldiers. Whoever conducted these attacks must feel a great regret.

Well, who is behind the attacks against our soldiers in Syria on 3 and 10 February? This question must be clearly answered. Otherwise, we will not be able to see the big picture and focus on the target. For this reason, it is necessary to know well the Iranian soldiers with the military appearance of the Assad Regime and the Shia militias brought from various parts of the world.

We need to see these facts very well. There is a proxy war in Syria, and thousands of mercenary militias have been brought here and are still being brought here. The Assad Regime has very few soldiers loyal to it and these soldiers only protect Bashar al-Assad and his family. Because in the 9-year civil war, there is nothing left such as the Syrian army.

Currently, the land units of the regime are led by Iranian generals. Also, Russian soldiers control the Air Forces. Bashar al-Assad has become puppet and plaything of the USA, Iran and Russian soldiers who occupied his country. He is so pathetic that could not do anything against Israel, which bombs his country and its capital Damascus every day.

We have recently seen this hurting reality in Idlib. Although they were pretending to be hostile to the USA, they did not even dare to shoot a bullet at the US forces in Syria. US President Trump has said that he will not give up the oil in Syria and occupied a third of the country; Iran attacks Turkish soldiers and innocent civilians. They are trying to drive people of Idlib from the region to the Turkish border and they continue to hit civilian settlements.

Velayati, one of the senior advisors of Iranian Supreme Leader Ayatollah Ali Khamenei, expressed another Persian lie, saying "The Syrian government and its allies on the resistance front will move from Idlib to the east of the Euphrates and expel the Americans" at the press conference on January 30. Despite all the embarrassing events, it is obviously instead of the USA and Israel; they gave priority again to the murder and exile of innocent civilians.

In that case, we should know the units attacking our soldiers well and we should not make any mistake when setting primary targets. Besides, when we hit it, it should make a sound and nobody who shed the blood of Turkish soldiers should dare to do so again. Otherwise, we will suffer greatly. Therefore, it is necessary to focus primarily on Iran and the terrorist groups it supports.

The British Daily Telegraph stated in its report on January 26 that Iran-backed Afghan fighters, known as the Fatemiyoun Brigade, had received radio speeches indicating that they participated in the conflicts in Idlib. According to the newspaper, the number of Fatemiyoun fighters in Idlib is quite high.

Also, in January, some news reported that Iranian-backed groups were sent to the Idlib and Aleppo fronts based on Turkish intelligence, and US Secretary of State Mike Pompeo criticized the large-scale offensive in Idlib and western Aleppo on January 27, blaming “the Joint Forces of Russia, the Iranian regime, Hezbollah and the Assad regime”.

While Iran continues its military and political support to the Assad administration, it has feared fighting against the Syrian army's northwestern operations, namely the United States. There was no sense of embarrassment or regret after the assassination of Major General Qasem Soleimani, Commander of the Jerusalem Force, by the USA on 3 January. It is a very disgusting behavior for Iran to go towards the Idlib operation despite so many attacks of the USA.

Although the elimination of Soleimani, the architect of Iran's regional strategies, led to comments that Iranian influence in Syria would begin to decline, the situation has become the contrary. Being afraid of such a situation, Assad sent his intelligence chief to Tehran to discuss "coordination in the new period" with Iran.

Iran's attack in Idlib and firing on Turkish soldiers should be seen as a bilateral message. The first  message is to Tehran's rivals that it has not lost its power and influence in Syria. The second message is to the units of the regime, "I stand by you every time and everywhere, keep trusting me".

Iran's show of strength against innocent civilians, not the United States, was also read in the January 26 news of the Persian News Agency, which is linked to the Revolutionary Guards. In the news, it was emphasized that the role of the Quds Force in preventing the overthrow of the Assad regime from the beginning of the uprising in Syria. They openly and clearly said that they are keeping the regime alive.

A major reason Iran did not directly interfere in operations in northwestern Syria after the U.S. withdrawal from the nuclear agreement in May 2018 was its desire not to lose Turkey as a partner to new U.S. sanctions. But recently, Turkey's shift of focus in the region from Syria to Libya, even for a while, has been seen as an opportunity for Iran. That is why every precaution must be taken against Iran, which has attacked, and they must be punished.

Currently, Turkey's most important enemy in Syria is Iran. This Persian state has become so fierce that the Iran has not had the courage to even kill an American soldier, even though the USA ruthlessly attacked Iran and assassinated its generals.

However, Iran's power is sufficient against the innocent Sunni people. In Syria and Iraq, thousands of Sunni Muslims were brutally murdered, while survivors were displaced from their homes and had to migrate to the Turkish border, where they could survive.

Since the Sochi agreement reached on September 17, 2018, Iran and Russian regime forces have killed more than 1800 civilians in Idlib. Iranian Revolutionary Guards use terrorist groups formed by militias brought by Iran, Afghanistan and Pakistan against civilians and Turkish soldiers. These groups, made up of thousands of violent terrorists, are brutally fought by making them believe that they are fighting a holy war for their sectarian beliefs.

From the beginning of 2019 to February 10, 2020, 1 million 640 thousand civilians escaped near the Turkish border due to the attacks. With the people who displaced before 2019, this number exceeds two million. By scaring the civilian population, Iran, Russia, regime elements and terrorist groups want to make them immigrate to Turkey. On the other hand, they do not hesitate to attack our soldiers by trampling on the ceasefires and agreements as they see the Turkish military presence in the region as an obstacle.

With the Sochi Agreement, Turkey positioned itself as a shield for innocent civilians in Idlib. However, with the attacks that continued after January 28, it could not prevent Iran and the regime units from going into the town of Ma'arrat al-Nu'man. After Morek and Surman, the Turkish observation point in Maar Hattat was also besieged by Iranian soldiers.

Despite this, Turkey remains committed to keeping troops at 12 observation points. Against the advance of Iran and the regime units, which Russia supports from the air, it is storing up in the region with a military unit of approximately 40 thousand.

Until the end of February, if they do not retreat to the borders of the conflict zone, they clearly stated that they would strike. Turkey has declared a message that it can no longer maintain the ceasefire regime in the four de-escalation zones declared under the Astana Agreement.

Turkey must hit hard and strong and should not leave the job unfinished, as in previous operations. In this way, all friendly and hostile countries should know that there is nothing as dangerous as shedding the blood of Turkish soldiers. Because the punishment for this will be very severe. That’s it…

More in this category: « One Step Closer to the Islamic Union which is Seen as a Utopia Operation Idlib is about to Start »
Login to post comments
back to top