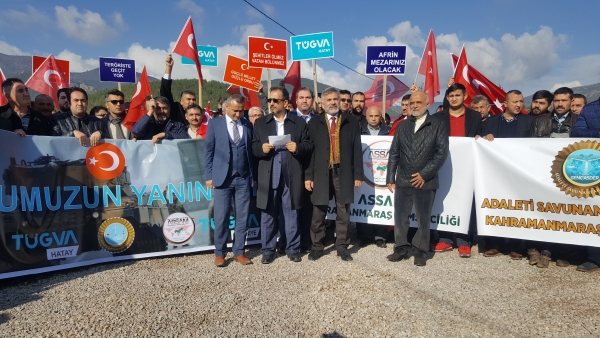 OPERATION OLIVE BRANCH HAS BEEN A LIGHT OF HOPE FOR THE OPPRESSED!

This operation is undoubtedly carried out due to the fact that international supported terrorist organizations (PKK, PYD, DEAS and their derivatives) are a clear threat to our country. In this context, again, PYD , the terrorist organization that has benefited from the violence and instability in Syria, won the area along the southern border of our country, unfortunately, with the support it has seen from some of our allies and targeted our country, demographic structure and civilians in the region, has forced this operation to be carried out.

No country can remain silent against such a insidious plan, the corridor of terror that is intended to be created against itself. It is known that this treacherous organization  such as DAES and the PKK that we are fighting have attempted many attacks targeting our homeland and nation not only outside our country but also within our borders.

Operation Olive Branch is legitimate from beginning to end and complies with international law. Turkey never and never targets the territorial integrity of Syria or any Kurdish, Turkmen or Arab element living in the region with this operation.

In the environment of blood and tears that have spilled in our geography, millions of our brothers have been forced to leave their homeland. Events once again show how much the Islamic world needs and has to know each other, develop sustainable projects together, protect its own land, self-determination of its own future.

As retired Army members and Turkish youth, we will not be excluded from this process in which our country is located, and we support this justified operation with all our assets and declare that we are ready for duty at any moment.

Today, ASDER, ASSAM and TUGVA believe that Turkey's right in this operation under international law is indisputable, and we ask Allah to make the Turkish army victorious in this operation, which was launched to achieve lasting peace, establish an atmosphere of peace and security in the region and eliminate those who try to cause chaos.

It should not be forgotten that "The continuation of effort from us results are from Allah."”