Graveyard of Superpower and Mazar-i-Sharif 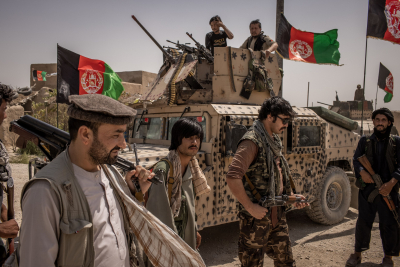 The lands of Afghanistan became a graveyard for the two superpowers of the world, the Soviet Union and the USA. The Taliban forces currently in power have succeeded in expelling US soldiers from their country, just as they expelled Soviet soldiers 32 years ago.

The Soviet Union, which had to leave Afghanistan in 1989, became a country that was thrown into the garbage dump of history in a very short time before it could get over the shock of the defeat in Afghanistan. The Soviets, the most ruthless perpetrators of communist ideology, were divided into 15 parts, 6 of which were the Turkish States, in 1990.

The fighters of Afghanistan, who made their country a graveyard for the communists, succeeded again in defeating the USA, the base of the capitalists. The US collaborator Afghans who supported the occupation embarrassingly had to fall out of the aircraft. It is understood from the photos that appeared in the media all around the world that at least two Afghans died after falling from the aircraft.

Afghan collaborators who were able to get into the aircraft encountered another surprise. The surprise was that the military transport aircraft landed in Uganda instead of the USA. Similar to Şener Şen movies, the 600 passengers packed like sardines who landed in the middle of Africa instead of America are probably busy cursing the US President Biden right now.

Another important defeat for the US is that the weapons, vehicles, and ammunition they spent trillions of dollars passed into the control of the Taliban forces without even firing a bullet. It seems difficult even for the USA, which had to leave the country in a few days, to open an embassy in Afghanistan. To put it briefly, Afghanistan has become a graveyard for the USA, just like the Soviet Union.

When you think of graves, the fourth largest city in the country, Mazar-i-Sharif comes to mind. The reason for this name is the Blue Tiled Mosque and tomb, which is claimed to be the tomb of Ali. We still do not find it appropriate to use this name. Instead, the name “Graveyard of Superpower” suits Afghanistan better.

The Soviet Union was destroyed after the terrible defeat in Afghanistan, but the United States is not expected to collapse in the same way. However, it should not be a prophecy to say that economic and social disasters await the USA, which is rapidly losing power and is taking heavy damages every day, especially in its competition with China.

Because it is former US President George W. Bush who caused this bad end. He claimed that he would organize a Crusade after the World Trade Center attack on September 11, 2001. In a short time, the “Crusader Armies” that entered Afghanistan and Iraq managed to turn both countries into a bloodbath and proved that the Westerners would do all kinds of immorality for war.

Now people all around the world, especially Americans, will question US presidents like Bush and Biden. It has become clear that the real purpose of the attacks, which caused so much massacre and expense, was “marginalizing Muslims” and “attempting to invent a new enemy” instead of the collapsed communism.

This questioning will of course lead to the emergence of many grim realities. Because people who are blindly used by the Western media and the propaganda of Hollywood movies are still not able to get away from being shocked by the statements of the Taliban. So much so that it was announced that amnesty had been declared for all previous Afghan officers and that executions without trial were banned.

In addition, the spokespersons of the Taliban, who announced that the world's largest drug smuggling with military cargo planes of the USA is prohibited, have declared that they will respect human rights and freedoms, contrary to propaganda.

In the meantime, it is expected that investigations will begin regarding the third skyscraper, which was destroyed vertically with the help of explosives even though no aircraft was hit during the “World Trade Center” attacks, which was claimed as the pretext for invading Afghanistan.

It is not the Afghans who are victims of the war who should do this first. The real people who need to go after the facts are the families of the nearly 2,000 US citizens who died in the towers when they were working as firefighters. Technically, it is not possible to collapse all three skyscrapers vertically without explosives. Thanks to regularly placed and mathematically timed explosives, it was possible to perfectly demolish the World Trade Center skyscrapers and collapse them vertically without damaging the surrounding buildings.

It will soon become clear what great “tricksters” the US rulers are, as in the name given to the State of Delaware (Delaware sounds familiar to the Turkish word “Dalavere” which means “trick”). That’s it…

More in this category: « Can the Long-Waited Peace for Twenty Years Come to Afghanistan? Afghanistan »
Login to post comments
back to top