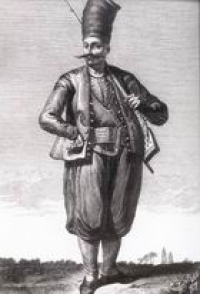 There is no definite and clear information about the life of Koçi Bey. It is known that Koçi Bey was originally Albanian and was brought to Istanbul from Korçë by means of a devshirmeh and entered the Ottoman Palace. It is not known for certain that Koçi Bey was from Korçë, but the fact that the graves of his wife and son Sefer Shah are in the Iljaz bej Mirahori mosque in Korçë, and that his grave is in the village of Plamet of Korçë, strengthens the thought that Koçi Bey was from Korçë. In various sources, it is stated that the real name of Koçi is Mustafa and that the name Koçi is his nickname. The name Koçi is in the forms of Koçi, Koca, Kuçi in different sources. The word “Koç” in Albanian means red. It is highly probable that Mustafa Bey was given the nickname Koçi because of his red-colored face. There is no definite record of the date of the devshirmeh and the date of entry to the palace. However, it is known that he served in various services in Enderun from the reign of Sultan Ahmet I to the reign of Murat IV. Especially during the reign of Murat IV, he was taken to the Privy Chamber (Has Oda) and gained the trust of the Sultan and became his confidant. Koçi Bey participated in the Baghdad expedition as the accountant of Sultan Murat IV. After the death of Sultan Murat, he became the accountant and confidant of Sultan İbrahim, who succeeded him. Koçi Bey retired in the last days of Sultan İbrahim or in the first years of Mehmet the Fourth and settled in Korçë.