Towards The Founding Date Of The Sokoto Caliphate: Introduction 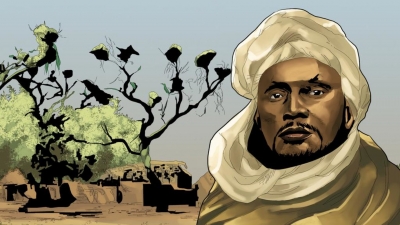 This article, which is the first part of series of article, will begin by briefly addressing the main issues that the series will address in order to shed light on the articles to come. Accordingly, the main goal of the series will be to outline the Sokoto Caliphate established in Nigeria - which was established in the early 19th century and was in effect until the early 20th century. In order to understand better the position of the established caliphate, previous states and religious structures in the region will be mentioned.

Before any religion reached Africa, idolatry prevailed in the region. Although idolatry does not have the systematic structure like religions have, it has a structuralist feature in terms of keeping the people in the region together and having the same belief and culture. Although this belief continues to exist, it is less powerful than it used to be. Because this faith was not interrupted by Judaism, but by Christianity and then by Islam. The reason Judaism does not spread in Africa is because it is more about religion's own characteristics than geographical features. As it is known that this religion was sent down to a certain race and was exclusive to them. Because of this, Judaism will not be the theme of our article.

It can be easily said that both religion and geographical features played a role in the spread of Christianity. The discovery of cultural and commercial links between Palestine and Africa facilitated the spread of Christianity. So, for many Africans, Egypt, like Palestine, was a very sacred piece of land. Another reason that facilitates the spread of this religion can be expressed as the exposure of North Africa to the oppressive rule applied by the idolater Roman Emperor to other regions. With the advent of oppressive laws, the demand for high taxes exceeded the strength of the inhabitants of North Africa. As such, Christianity, which offered a tool of resistance against the Roman Empire, was appealing to Africans living in the region as it was seen as a means of getting rid of the empire's tyranny. In the first place, Christianity, which was a means of getting rid of the tyranny of the Roman Empire, thus spread began with North Africa and then through other parts of the continent. With the missionary activities that started with colonialism, Christianity continued to spread rapidly across the continent.

Although Christianity seems to be a means of escaping the oppression of the Roman Empire for Africans, this intercession has been limited. Because the Byzantine Emperor continued from where the Roman Emperor left off with similar torment and pressure, although he was a Christian. As such, North Africa anticipated a similar occasion, just as the oppressive rule of the Roman Empire was fulfilled with an important role of Christianity. This expectation was met with the spread of Islam to those sides. Because the expansion of the Islamic state to the Middle East, North Africa and even South America in the seventh century caused it to be considered as an alternative religion for African Christianity.

The Islamic army, which was defeated by the Byzantines twice in Dangola, had established its rule in Egypt, as an agreement known as Baqt shows. So much so that, by signing the Baqt agreement, which will last 650-700 years, it accepted it to be the symbol of the only legitimate Christian state in the region without conquering Nubia. Establishing its rule in Africa, Islam started with the conquest of Egypt and spread to other parts of the continent over the time. Right here, it seems important to distinguish whether the spread of Islam and its relationship with non-Muslims differed from previous states or not. According to this, "Christians were encouraged to be Muslims in the North, but they were not forced". Contrary to popular belief, Muslims did not force anyone to convert to Islam by threatening with death, but rather gave spiritual freedom to Christian (and Jewish) communities that recognized Islamic rule and made them pay a special tax. Indeed, the tax burden imposed by the new Islamic state was much less than the tax previously requested by the Byzantines. Under such a system, the number of Christians in North Africa and the Nile Valley would gradually decline over the next few centuries”. [1]

As stated in the statement quoted above, it is clearly stated how Islam spread in the region. After briefly discussing how Christianity and Islam spread in Africa, our next article will focus on the spread of Islam in North and West Africa and the states established in two regions.

Last modified on Friday, 20 November 2020 09:08
Published in Nigeria
Login to post comments
back to top