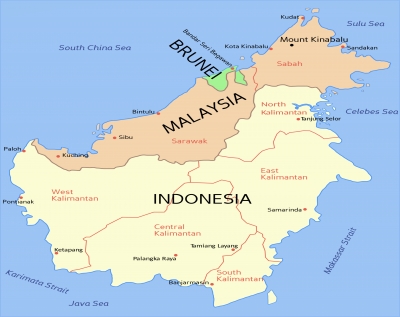 Over the island of Borneo, an island of unshared riches divided into three by British and Dutch colonists, and a Muslim homeland; the state of Brunei, the states of Malaysia, the future Indonesian capital, and Philippine claims

It is the third largest island in the world, famous for its tropical forests, wildlife, red-haired orangutans, Pied leopards, from the most remote corners of the world. The island, with a population of close to 25 million, is divided in half by the equatorial line.

Borneo is the only one in the world with three different countries. These three states have Muslim-majority populations in Indonesia, Malaysia and Brunei. The official language of all three countries, with various minor differences, is Bahasa. Indonesia's 5 Kalimantan Region provinces, Malaysia's Sabah, Sarawak, Labuan provinces and Brunei are all on this island. Indonesia, a country of a quarter of a billion people, announced last year that it would move its capital to a new location on this island.

A claim on the island also comes from the Philippines, the only Christian-populated country in the region. Last month, The Philippine foreign minister caused a diplomatic tension by saying that Borneo, formerly a Muslim sultanate, ruled Malaysia's Sabah, so it still had rights.

There are 17 different ethnic groups on the island, most of them Muslims. One of them, the Dayaks, which have six tribes, is a forest people. It features notorious cannibal groups that attack the villages of Muslims who have migrated from the island of Madura, cut off their heads, remove the hearts of those they have killed, and ritually eat them. In addition, British SAS commandos, famous for their sabotage and assassination in Muslim countries, train among beatings on the territory of the Brunei Sultanate, participate in their rituals.

Brunei is a classic British statehood. In order for Muslim countries to be a whole and not to get rich or to get stronger, they separated small but rich or very srategic regions and made them need them. Kuwait, Singapore, Cyprus, Qatar, Bahrain, Gambia, Gibraltar, Brunei, United Arab Emirates, such resorts. They need the protection of Britain to stand, so they share their resources with the British. The Sultanate of Brunei is also an oil-rich country.

Borneo has hydrocarbon reserves. Oil and gas production is very important for all three countries, but especially vital for Brunei. The forests of Borneo are the oldest ecosystem in the world. It has soils, volcanic mountains full of minerals. Advanced level of mining, lumber, cocoa, rubber, fishing. Borneo or Kalimantan could be called the island of the future.

A person cannot help asking the question of dividing such a rich and valuable island between three tense Muslim countries: Indonesia, Malaysia, Brunei, which share the same religion, people, language, history, why don't we come together and say common money, pool account, army and intelligence force, research, university, even divide an island into three?

Last modified on Tuesday, 10 November 2020 11:42
Published in Islamic Countries
Login to post comments
back to top