If You are Honest, Apply to Court! 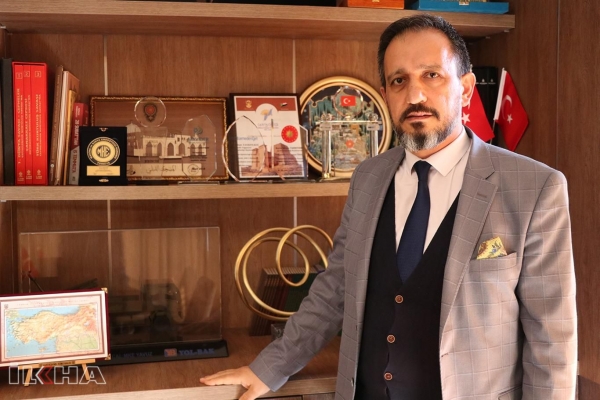 As you know; after some unfounded news was published in the West, these unfounded news were accepted as evidence in the courts, parties were closed, workplaces were labeled as Islamic capital, the spiritual education centers that serve our children were closed one by one.

Once, Ümit Özdağ made false claims about SADAT and its founder Retd. Brigadier General Adnan Tanrıverdi. He said that "SADAT has armed training camps in cities of Tokat and Konya". When asked by people from his inner circle where he obtained this information, he said, “The USA first makes it published in its local press the information it will use against a person, institution or state. Then they use it internationally, quoting from the domestic press. I took the information from the USA and Israel.” he added.

Meral Akşener assumed it was true that she had heard from a person who was his friend and slandered by saying "SADAT has Armed Training Camps in Tokat and Konya". Ankara Office of the Chief Prosecutor, which accepted this statement as a criminal complaint, initiated a prosecution against SADAT and called Meral Akşener to testify. In the long interrogation, to the question of where you got the information, she said "I do not remember", to the question of whether you have a document, she said "no"; and after this questioning, she could not mention SADAT again.

After July 15, it was understood that FETO had planned to discharge religious people after the coup by starting these two organizations, in accordance with the orders of their western masters. In fact, FETO members who were on trial after July 15, kept saying that a formation called the SADAT militia had a part in these deaths.

We see the same scenario nowadays. Through Professor Doctor Melih Bulu, who was appointed as the rector of Boğaziçi University, provocateurs as if they were students who did not attend school but applied for a new GEZI attempt. Parallel to these actions, the masters of those who target individuals and groups who strive to live their faith such as Cumhuriyet, Oda TV, Diken.com, Işık Kansu and Fatih Altaylı are unanimously targeted at SADAT Inc. and ASSAM.

They claimed that SADAT trained assassination teams and would be used as an alternative illegal warfare element in the country, supposedly based on the information they obtained from SADAT Inc.'s website. Likewise, they kept shouting that ASSAM wanted to establish an Islamic State and how this was allowed.

These people have been hitting the conservative people like a sledgehammer with the news they have made and the perception they have created in Turkey. They did not give them the right to live. Fatih Altaylı who was talking about democracy, emphasized that Retd. General Adnan Tanrıverdi, the founder of SADAT and president of ASSAM, became a general in 1992 and Altaylı was calling the account of the fact that why he was not kicked out with the decision of Supreme Military Council, Altaylı has the mentality of 28 February period.

Look at that. It is astonishing that he showed such courage to say this, while those who tried to conduct February 28 were tried, received punishments, but saw the compassion that the Turkey should not show and their sentences were suspended without serving a single day of imprisonment.

Because they still see themselves as master and strong against people they see as conservative. No, you are absolutely nothing anymore. You will never be able to make us live those days of chaos again that you miss, neither to us nor to the conscientious voice of this country, the national will.

Who Are You Working For? But you will not be able to do it anything. Because Turkish nation is now awake and aware. You do not write any single word against the companies that are servants of imperialism which aim at the people of the region in Muslim States where are covered with blood and tears, for some reason SADAT and ASSAM which is trying to dominate the national and domestic understanding in Muslim States and act completely in accordance with the legal legislation and do not conduct any unofficial activity. You see it as a duty to taunt these distinguished organizations that take steps that will lead to the awakening of Muslim peoples.

I will try to tell you the truth once again with this article. If you insist on not understanding after what I wrote, then there is nothing to do.

As announced on the official website of SADAT Inc, it provides training and consultancy services to the Armed Forces and Police units, which are the official institutions of the Muslim States, under the control of their states and with the agreement made in their own countries, although it declares that it does not provide training to civilians and individuals, even if they are soldiers, and that we do not have any training activities and facilities in our country, we are aware of the reason behind their use of this black propaganda. And we will continue to be aware of it.

Countries requesting services from SADAT Inc are required to know the techniques and tactics of Unconventional Warfare/Asymmetric Warfare in order for their armed forces and law enforcement to implement operations against UNCONVENTIONAL WARFARE in the fight against terrorist organizations acting with unconventional warfare/asymmetric warfare techniques. Unconventional Warfare/Asymmetric Warfare is a type of war fought against the invader by the states located in geographies such as our country that may be the target of global powers, and the resistance forces previously organized in the occupied regions of their countries. Today, in peacetime, there are states that are in need of training and strength development with Unconventional Warfare/Asymmetric Warfare technical tactics in order to be able to carry out resistance operations in the regions occupied by the enemies of the country in the case of war with armed terrorist organizations. It is obvious that if this service is not given to the states in need by their allies, these countries will be allowed to fall into the net of their imperialist enemies. If this fact is not known, those who are messing with SADAT would work on behalf of global powers which sees SADAT as a rival that develop scenarios against it.

SADAT Inc. is a company which is established by several patriotic officers and non-commissioned officers retired from the Turkish Armed Forces, who have been fighting the terrorist organization PKK and its counterparts for decades. It is the first and only defense consultancy company in the Islamic World and Turkey. According to the laws of the Republic of Turkey, SADAT Inc does not have the opportunity to conduct any educational activity in Turkey. In this sense, it does not have a single activity in Turkey.

SADAT provides training to foreign armed forces and police units within the framework of their own legal regulations. The part you quoted on the website of SADAT, which you claim to have trained to train assassination teams, describes the Unconventional Warfare Training to be given to the armed forces of these countries.

Following these trainings, which are also given in the Turkish Armed Forces, among the training level targets that the military units will reach are trainings such as raid, sabotage, assassination against enemy elements. More recently, operations such as the Euphrates Shield, Olive Branch and Peace Spring are operations carried out within the scope of Unconventional Warfare. An armed force that has not taken this training cannot be expected to be successful against any terrorist organizations.

The only reason for these groups to bring these slanders to the agenda is nothing more than to open space for the companies of the imperialist colonial countries, which have been operating in Islamic countries for the last century and constitute the basis of the proxy wars.

It should be noted that SADAT Inc. is the first and only domestic and national military consultancy company operating in Turkey and the Islamic world.

In our next article, we will mention trainings of SADAT Inc.