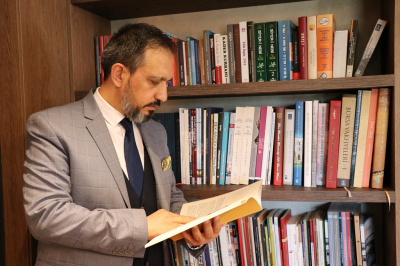 The Arab Spring was a hope.

Unfortunately, the countries of the region, which broke away from the Ottoman Empire for the last century, put forward an administration that was hostile to their own people with puppet rulers.

Well, the dictatorship was about to end. The people would come together with justice and peace. While the rulers of the country enriched themselves, they impoverished their own people. They were saying “it serves you right!”...

The person who demolished the so-called dictator Saddam's statue during the US occupation in IRAQ cried tears of regret when rapists of Johnny came to their country, where they hoped peace and tranquility years later, with blood and tears.

Chinese commander Sun Tzu, who made the first application of psychological warfare in history without a plan and organization he emphasized the importance of starting a civil war by saying, “It is necessary to know how to protect one's own strength while provoking the opponent to spend power”.

This is what has always been tried on us too.

Now, another victim has been added to this list of nationalist spring; Kazakhstan!

The country, which gained its independence from Soviet Russia in the 1990s, once again witnessed the public demonstrations it faced occasionally.

In the beginning, the media of many countries, especially the Turkish media, did not pay much attention to the demonstrations. Just like our cutting trees protests in Turkey.

The protests started with a group of nature lovers who innocently wanted to prevent trees from being cut down and protect greenery.

Then we saw that all the terrorist organizations in the country set up camp in Taksim Square.

The police intervened disproportionately and on the other hand, burned the tents of the demonstrators in the morning raid. You know the rest of the story.

The same thing happened in Kazakhstan. While it is known that it is the 8th energy center of the country, the raise in LPG prices poured the middle class into the streets.

Moreover, considering the settlement of the Kazakh people in the form of villages and towns rather than urbanism, it is a fact that these people are a group that does not come together.

Some intellectuals of our country explain this situation as;

“10 rich families in Kazakhstan have collected billions of dollars with their children living in England, the Governor of a region has become the richest businessman. So, income inequality is high. The natural gas price raise would have been the final straw, but it is obvious that the existing injustice has caused a backlog of reactions.

The following verse is a command, not a recommendation;

﴾An-Nisa 58﴿  Indeed, Allah commands you to return trusts to their rightful owners; and when you judge between people, judge with fairness. What a noble commandment from Allah to you!
Surely Allah is All-Hearing, All-Seeing.

If there is no justice, which is our first mission, Allah would not help.”

How well we summarized the events, right?

Allah does not help. For what? For who? How and why is there no justice?

The people of Kazakhstan have been crushed by the assimilation of religion and nationalism under the pressure of Russia's hegemony in the last century and forced to change their identity. They have only just begun to recognize the concept of religion.

Neither Islamic nor Turkish history has been taught to them so far. What the representatives of a non-governmental organization coming from our fatherland told me just 2 months ago was;

“Until we came to Turkey, we did not know that Turkey is made up of Turks and that they are our brothers and that they migrated from Central Asia. We did not even know they were Muslims.”

And yet, if you come out and describe these events by talking about enrichment and injustice, it means that you have not understood Sun Tzu's strategy, which we have exemplified above.

How did the crowd gather to come to the squares from miles away, seen as an opportunity for those who took to the streets with the LPG price raise? There is no non-governmental organization in Kazakhstan like in Turkey, the use of internet and social media is not common much. How did these people get organized?

The country where FETO is the strongest after Turkey is Kazakhstan. Does this remind you of anything?

So, who handed out the guns to that crowd? Moreover, who opened fire on the soldiers and security forces from that crowd? Is that what a price raise protest is like?

Remember the demolition of the statue of Saddam Hussein. They tried to do the same. Who do you think tried to demolish the statues of Nursultan Nazarbayev, who played the biggest role in Kazakhstan's current wealth and came to power for the last time with 97% of the people's vote in 2015? The price raise protesters?

Recall that those who said “Nazarbayev fled the country” used the same rhetoric for our late Prime Minister Adnan Menderes in the 1960 coup, and also for our President Erdogan on July 15.

Unfortunately, the last victim is Kazakhstan!

But the plan that failed on July 15 will be there too. However, Russia's entry into Kazakhstan may delay the future goals, but it will not prevent them.

The Organization of Turkic States, headed by our President for a term, will quickly build a Crisis Management Center.

Now it is time to determine our own future in our region under the leadership of Turkey.

Our duty here is not to lose our President (the modern-time Abdul Hamid) in 2023 to the enemy, regardless of the opposition parties’ cries of “WE ARE HUNGRY”.

The rest is easy. The help of Allah, which was thought not to have come, may come as early as possible.

Read 30 times Last modified on Friday, 11 February 2022 08:52
Published in Kazakhistan
Tagged under
More in this category: « Fatherland Kazakhstan Bleeds…
Login to post comments
back to top