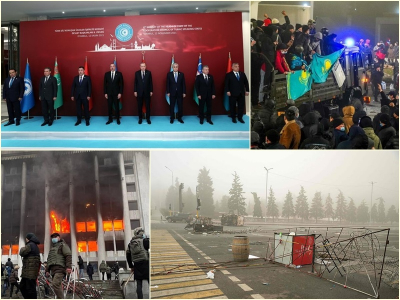 The efforts of the Turkish Nations to act together disturbed the West, Russia and China, especially the UK and the USA.

Even the efforts for alphabet and language unity in the Turkic Republics make brother republics a target.

All the states in our Civilization Geography, almost all of which people are Muslims, are endangered by losing their trust in every sense through foreign intelligence services, the media and various means.

Unfortunately, visible problems such as disturbances caused by the current administrations, economic difficulties, social injustice can also expose citizens to the state.

Whatever the reason may be, no act that turns into looting, plunder or murder is innocent.

The excessive increase rates in Kazakhstan, which made people out of their patience, took people to the streets. This is the apparent reason.

Although the death toll was much higher than the estimates in suppressing the events, the rioting groups could not be stopped.

Nursultan Nazarbayev, the elder leader of Kazakhstan and the Turkic world, has been dismissed from his duties and is said to have been taken to Moscow.

It is said that some of the Kazakhstan Army and Police Officers acted with looters. We know this situation very well from the Gezi Events and from July 15.

Kazakhstan called on Russia for help. This is a complete heedlessness. The current president of Kazakhstan should step down from office immediately.

It has been claimed that Russia stipulated some conditions on Kazakhstan in order to provide aid.

Among the conditions stipulated;

Recognition of the annexation of Crimea,

Acceptance of these conditions is the first step for Kazakhstan to lose its independence and launch the occupation process.

Applauding the entry of Russian troops into Kazakhstan in anti-US ways by some in the Turkish public opinion is heedlessness and treason.

In fact, the UK and the USA are turning Russia to the East to distract it from the Western Front. The lands offered as present and plunder in the East are ancient Turkish lands. The member states of the Organization of Turkic States live on it. It seems that what happened to Kazakhstan could also happen to other Turkic States. Turkmenistan has long been the target of the US and Western media on the grounds of its anti-democratic practices.

We see the results of the West's touting for democracy, especially in Iraq and Libya.

The point reached by the events that were heedlessly applauded as the Arab Spring is obvious. Now our southern neighbor is the USA and the other Western countries.

Some traitors have been saying for a long time from the USA that they are waiting for a Turkish Spring just like the Arab Spring.

What do we have to do?

NGOs should issue a declaration together, plan and act stronger together.

TGTV and other National NGOs, where are you?

Parliament should convene immediately with the Agenda on Kazakhstan. This call is not only for politicians who are in power. Opposition parties should also take steps in this regard.

Also, why does Turkey remain silent as the Term President of the Turkic World? Why it is not a mediator? Why is a delegation still not going to Kazakhstan? Instead of the person we declared Elder Leader, someone who knows Turkic History and Civilization much better and has a counterpart in intellectual circles, even if he is not on the field in the Turkic World, should be appointed as a coordinator and an urgent Peace Force should be formed by traveling around the relevant states. This Peace and Rapid Reaction Force should be established permanently, the countries of the organization should allocate troops, and the main headquarters should be established in Turkey and Uzbekistan.

The Kazakhstan Incidents have made the necessity of a peace and Rapid Reaction Force a condition for the states of the Turkic World. The effect of the crescent and star on the world is well-known, mostly on the Islamic peoples. Afghanistan is the most vivid example. The Turkish Military is the power to calm the events in the most bloodless and peaceful way in Kazakhstan.

Armenia sends troops to Kazakhstan. In its early years, the USSR used Armenians to massacre Uzbekistan and Turkmenistan. What was done when this was fresh in our memories, especially in the memories of the people of the region, is officially for the intimidation of the Turkic World. It is quite unacceptable.

We do not want a second Karabakh case.

We do not accept the separation of Kazakhstan and the demand for autonomy. So, in return, similar rights of the Turkic Republics in Russia should be returned. Their Local Languages must be recognized as Official languages. This issue should be brought to the agenda by taking part in the media as Diplomacy and Psychological Warfare/Operation.

“WAKE UP KAZAKHSTAN” and “NATIONAL UNITY” call should be made to Kazakhstan. This process may cause Kazakhstan to lose its independence and future.

Similar events may occur in other Turkic Republics, including Turkey. Our people and the Turkish Nation should be made more conscious. The invitation of Russia is the beginning of the actual occupation. People of Kazakhstan should solve their problems with themselves and their brothers, namely the Organization of Turkic States.

Mandate and patronage are unacceptable. If this is not turned into a national slogan, independence will go away. The Turkish War of Independence and the Republic of Turkey were established with this slogan. The example should be told to other Turkic peoples as well.

It is unacceptable for the media to play ostrich. Artificial agendas, early elections, presidential candidates of the opposition, appointments in the Istanbul Metropolitan Municipality cannot be the agenda of Turkey. Relevant institutions do what is necessary. We openly express and declare that we find it malicious to engage our people with these artificial agendas. These discussions, which have almost an anesthetic effect and tire the public, must be put to an end immediately. Marginalizing may create political interests and benefits in short term but it causes a great separation in the medium and long term. Disadvantages mush be observed.

Our people must be kept vigilant against international fait accomplis. The consideration of Survival, State and eternity must be kept alive. The perpetrators of the Gezi Events and the July 15 coup attempt are still within our society. The silence of politics and the current attitude of the media is not understandable. We owe it to the public and NGOs to remind the public of the necessity of keeping our people vigilant against sedition and social deception.

As a result, whatever the cause, the bloodshed in Kazakhstan must be stopped. We have seen the consequences of the destabilization of the region in the suffering of the Arab Countries.

Our State, Political Parties and NGOs must do their best.

The efforts to save the day with social media announcements and shares are not suitable for Türkiye, which is the hope of the Islamic World and Oppressed Humanity, especially the Turkic World.

We call on all concerned and conscientious citizens.

What are we doing?

More in this category: Last Victim; KAZAKHSTAN »
Login to post comments
back to top