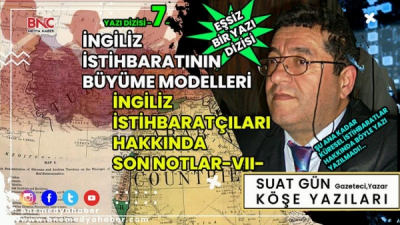 One of the most important events affecting Ottoman and Turkish history before the World War I was the assassination of Mahmud Shevket Pasha supported by British intelligence. The aim of this assassination was to deprive the Unionists of their guides and to allow the state to pass under the rule of novice ones. With this assassination, the Ottoman Army lost an experienced commander. When the leading role of the British Embassy in the assassination of Mahmud Shevket Pasha in 1913 was clearly revealed, rogue intelligence agents were declared “persona non grata” and expelled from the country. However, with this assassination, England dragged the Ottoman Empire into a void and made it possible for incompetent men to seize the power to rule.

Interestingly, the fate of the British intelligence officers serving in the Middle East was very bad. Each of them died in bad ways, as if possessed by a demon or cursed.

Gerard Evly LEACHMAN: He was killed in a raid in the village of Fallujah, near Baghdad, by Arab nationalist intellectuals who could not accept the British occupation and British arrogance.

Gertrude BELL played an important role in the upbringing of Lawrence and Arthur Evans and covering the work of British intelligence under archaeological excavation.

Bell has taken thousands of photographs with the appearance of a traveler in Anatolia, Syria and Iraq since 1905[1]. She prepared extensive reports about her travels and presented them to persons related to intelligence. She did not look like an official intelligence officer but wanted herself to be perceived as an adventurous, travel-loving person and she did it very well.

Her lover Doughty-Wylie died in Cape Helles, and her hostility towards the Turks increased. She served in the Arab Bureau established in Cairo in 1914.

When Bell was invited to Cairo, she spent her first week with her French counterpart Georges Picot and Mark Sykes who planned the sharing of Ottoman lands.

Gertrude Bell decided that the Principality of Saudi Arabia should rule Arabia. She started making plans to visit them.

Bell arrived in the city shortly after the fall of Baghdad in March 1917. She became secretary to Sir Percy Cox, the highest-ranking British officer in the Middle East. She was the editor of the newspaper called 1917 Arab Independence.

When Gertrude BELL settled in Baghdad, she led her mischief movements from there. When the Chief of Baghdad said to her, “I would prefer the Turks to stay here a thousand times more instead of you” she was surprised. She understood that the unity in the spirit of the people would not go out, she was devastated. She lived in a villa on the banks of the Tigris River in Baghdad until 1926. She was found dead in her home in Baghdad in July. They said she committed suicide. The forensic report has not been published. So, she got screwed up for nothing.

Jewish intelligence officer Aaronson suffered a similar end. His plane crashed on his way back from the peace talks in Paris. Was it an accident or an assassination? No one could understand. Years later, it allegedly collided with another plane. The British Air Force inspector responsible for investigating the accident was forces to resign. It went down in history as an unknown event. He died without seeing the result of his wicked work.

Thomas Edward Lawrence died in a mysterious accident while driving motorcycle. The British colonial order worked hard to establish in the Middle East. Then he returned to his homeland. Under the pseudonym T.E. Shaw, he first became a tank soldier and received a salary. Then he transferred to the air force, retiring in 1935. He died in a motorcycle accident a short time later. No information has been obtained about his death. No one respects his memory. Because God does not love hypocritical men, so the people do not.

William Henry Irvine Shakespear: In the eyes of the Arabs, he was not a stranger, but a friend who was like them, dressed like them. After meeting Ibn Saud, he began to support him. Saud was surprised that Shakespear spoke Arabic so well and knew all parts of the desert very well. Where did he learn this much information(!) Shakespear traveled 2500 km in the deserts of Arabia. The size of these expeditions, made on foot or camel back in that era, is indicative of Shakespear's dedication to British state policy. He mapped out Arabia on his trips and made population estimates. He was killed by the forces of Ibn Rashid, one of the Arab tribes affiliated with the Ottoman Empire.

Gerard Evelyn Leachman; A natural scientist of the Royal Geographical Society is an intelligence officer who works very systematically and has established a system. After the armistice, he led the troops advancing north, which made an effort to occupy more Ottoman lands. He came to Baghdad for the second time in June 1920. He was stabbed to death by Sheikh Dhari's son on August 12, 1920. After the death of Lehman, who was a stand-alone army, Colonel J.E. Tennant said that Britain's dominance in the region would disappear and it would be forced to withdraw in a short time. It happened accordingly.

With the encouragement of David George Hogarth, the Director of the Ashmolean Museum, an archaeologist and a consultant to the British intelligence agency, British archaeologists plundered Anatolia and Arabia during the reign of Abdul Hamid II. They started excavating everywhere. Under Hogarth, the British team is both excavating, mapping the oil fields and monitoring the German railway works.

He was an agent sent by John Philby's British Cairo office to handle reconnaissance; It worked with the logic of search, find, report. He struggled to provide news personnel behind the “Turkish-German” lines and to inform the center of the information he gathered from the supporters.

When Sharif Hussein fell from the British intelligence’s grace, it was decided to put his sons in charge of the small Arab states to be established.

When France refused to accept Faisal, the son of Hussein, who was declared the King of Syria on March 8, 1920, and occupied Damascus, his era ended 4.5 months later. Faisal fell into the void. The British immediately found a solution to this, they decided to appoint him as the king of Iraq. Plans were made for Faisal's visit to Iraq. At the Cairo Conference it was decided that he should be king, that this appointment was supposed to be made by popular vote, and that an election be held to do the job properly.

Faisal was the only candidate in the referendum. Voted whether to become king or not. He won with 96%. Considering that the opposition votes of the Shiites and Kurds are in the negative direction, it is clear that ninety-six percent is fabrication. Gertrude Bell has worked hard for Faisal and is exhausted. This is what she said: “I'm going to work to create a king again. It is so exhausting”!

In 1921, Faisal was made king of Iraq, which was in the British sphere of influence. His older brother Abdullah was made the Emir of Jordan by inventing a country called “Jordan”, which has never existed in history.

Sharif Hussein, who had a bad relationship with England in the Hejaz, was exiled to Cyprus in 1923, and his eldest son Ali became the King of Hejaz.

A year later, in 1924, the Saudis brought from Riyadh, a thousand kilometers away from Mecca, were declared the King of Hejaz in Mecca. Ali was sent to Iraq to live with his brother, and the rule of the Sharifs in the Hejaz came to an end.

The disintegrating and pro-Israeli policies implemented by the British in the Middle East caused a reaction among the people.

Over time, supporters of establishing an Arab League and forming a confederation together by getting closer to Turkey again increased. As efforts increased for the unification of Turkey and Iraq, Atatürk allowed the Iraqi delegation to come to Turkey for negotiations.

Prime Minister Hikmet Süleyman, who was in favor of establishing a confederation with Turkey, Chief of General Staff Bekir Sıtkı Pasha and Air Force General Muhammed Cevad were killed on 11 August 1937 in Mosul while they were going to Ankara.

More in this category: « How Should Be the Commander and the Leadership? English Notes on the War of Intelligence-Vl »
Login to post comments
back to top