‘One minute!' to America from Ummah 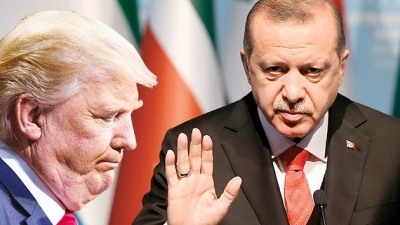 The upright stance of the 48 Islamic countries those took action in favor of Jerusalem, neutralized the US in the Middle East and also on the Palestinian issue. Due to being unable to find support on the international scene Trump sentenced to loneliness.

The final declaration of the Istanbul Summit of the Organization of Islamic Cooperation (OIC), which was extraordinarily convened in Turkey under the leadership of President Recep Tayyip Erdogan with the Jerusalem agenda, and subsequent developments ended the decades-long period of unilateral, chaos-causing US decision-making in the Middle East. While the United States was alone around the world in its decision to “declare Jerusalem the capital of Israel”, the process of mediating Israeli-Palestinian peace talks has also ended, even though it unconditionally supports the occupying Israel in the UN Security Council. President Erdogan, who prevented the establishment of a puppet government in Turkey with the July 15 coup, the PKK corridor to the Mediterranean with the Operation of Euphrates Shield in Syria, and the coup attempts in Qatar in the Gulf Crisis, not only disrupted the attempt of surrendering Jerusalem which is tried by Israel in the Middle East, but also became a global play maker by mobilizing the world to bring long-lasting peace to the Palestinian and Jerusalem issue.

Evaluating the Summit, Strategy expert of Association of Justice Defenders Strategic Studies Center (ASSAM) Nejat Özden said that the guests of the OIC Jerusalem Summit, which arranged an extraordinary meeting, were not only the presidents of state, prime minister or foreign affairs ministers of 56 Islamic countries, but two UN Security Council permanent members such as Russia and China. He drew attention to the fact that Summit also hosted leaders of different countries from Venezuela to Taiwan. Özden pointed out that the recognition of East Jerusalem as the capital of Palestine at the OIC Istanbul Summit had a worldwide repercussion and that unilateral Jerusalem projects based in the USA were gone, and pointed out that the summit had three important global results.

"First of all, the countries of the region were walking the route that the USA had drawn and also they have not been able to make adverse statements to the security of the USA and Israel in the Middle East until today. After Turkey, the countries of the region and even the world took action and began to declare that they did not recognize the plan of the United States and Israel to unilaterally invade Jerusalem. The Jerusalem Summit of OIC, under the leadership of President Erdogan, the taken decision destroyed the Empire of Fear in the region. The role of USA as the biggest play maker in the region has been shocked.”

“Second, until today, leaders in Muslim countries in the Middle East who did not rely on democratic sovereignty remained silent with very weak reactions to Israeli invasions, as they were afraid of being overthrown by US-backed military coups. Today, when mass media has developed so much, Muslim peoples not only in Arab countries but in all Islamic countries have seen the reality of Palestine and who has claimed Jerusalem. Now, the reaction that will shock the leaders who will remain silent to the Israeli invasions and the US injustices will come from their own people.”

"Third, it has been seen that no plan that does not take Turkey into account can be implemented in the Middle East. Turkey also disrupted the 15 July plan of global powers, the corridor of terror through Operation of Euphrates Shield, and the plans in Jerusalem after the dirty games played in the Qatar blockade. In addition, Turkey has not only disrupted the global plans, it has also opened a new path of peace in Jerusalem. Turkey has moved to become a global player rather than a regional player. This summit is a great diplomatic success of Turkey and a loneliness of the United States.”

Drawing attention to the historical importance of the Istanbul Summit, SETA Strategic Research Director Veysel Kurt said that the mission that led to the establishment of the organization was clearly revealed at the previous day's summit. Noting the importance of the leaders' summit, which was convened in a short time as a result of Turkey's great efforts, both for the highest level of objection to Trump's Jerusalem decision and for the transformation of hopes for the unification of the Islamic world into practice, Kurt also said:

"From the moment Trump signed the scandalous decision, President Erdogan's attitude, diplomatic moves, the way he expressed the issue, his way of mobilization of the Islamic world and his role in the emergence of a declaration of results that resonated with the international public will go down in history as Turkey's defense of Jerusalem.

USA LOST LEADERSHIP IN THE REGION

Evaluating the developments at the summit and its aftermath, Prof. Dr. Mesut Hakkı Caşın from Istinye University said, 'The decisions taken are historic, America has lost leadership in the region to Turkey and Russia, and America and its president Trump are responsible for the deaths and events in the region with the decision of OIC'”.

More in this category: Enjoy the Palestine PRISON State! »
Login to post comments
back to top