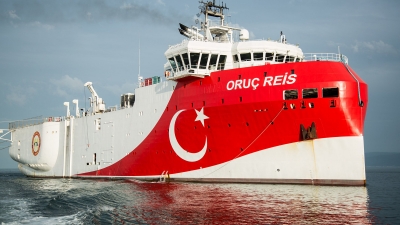 Turkey has conducted its oil and gas exploration through Western companies in the past. The lack of results from the search and screening activities carried out in this context so far has always put the question "Does someone want Turkey to be foreign-dependent in energy?"

Constant questions waiting to be answered and doubts that make us wonder and preoccupy our minds.

Of course, these thoughts are not futile. In the last period of the Ottoman Empire, With the permission of Abdul Hamid II, it is an indisputable fact that oil was searched and recorded one by one by saying that it was doing archaeological studies in the southeast of Anatolia and in the Middle East where the most fertile oil deposits are located today.

After recognizing this, Abdul Hamid II removed archaeologists from the area. However, before we could find the opportunity to take the necessary steps in our favor in the region, he was overthrown by the intervention of the treacherous coup plotter mentality within us.

President Erdogan has learned from history that he brought our seismic exploration and drilling ships to the Turkish navy fleet. Even more, he started ship production completely with domestic and national resources.

As a matter of fact, although there have been no results from the search and screening activities carried out by foreign companies by spending millions of dollars until today, it is a proper determination to say that 320 billion m3 gas in the Black Sea has just started with our own ship.

After Turkey began working with its own ships after search and screening activities, the idea of Western expansionism depriving Turkey of its natural resources has been wasted. After that, these countries aimed to drive Turkey into the coastline through the GCASC and Greece.

GCASC declared the Eastern Mediterranean energy fields, where there are possible oil and gas reserves, within the EEZ area and wanted to prevent Turkey from reaching the energy resources in the region. Turkey rejected this initiative with a decisive move, actively began using the Oruç Reis seismic search and screening ship in the Eastern Mediterranean. Turkey also accompanied Oruç Reis with its Navy in the face of any harassment and interference.

Contrary to the behavior expected from Western-oriented administrators, Turkey has shown a strong will with this move and changed the balance in the Eastern Mediterranean. The actions of other countries have been ignored when compared to Turkey, which is alleged to have raised tensions with the Oruç Reis ship.

The reason for this situation with the emphasis of Vice President Fuat Oktay;

Greece, which has engaged in incomprehensible provocative activities against Turkey, especially at the instigation of France, which wants to have a say in the region among EU countries after the United States, is likely to have retreated with the introduction of NATO to the region. NATO, which does not want to confront Turkey in the Middle East, does not want a conflict between Turkey and Greece over the Eastern Mediterranean.

In the statement made by NATO, it is understood that the negotiations will continue. Greece emphasized at the beginning that they will not be willing to negotiate in any way but now entering the negotiation process is considered as a positive step for regional peace. The withdrawal of the Oruç Reis ship should also be considered as an indicator of goodwill in this sense. At the same time, Minister of National Defense Hulusi Akar's statement on this routine withdrawal was a supporting explanation for this idea.

Turkey emphasizes that energy resources are sufficient for all countries in the region and Turkey is in favor of sharing in a fair way. By entering into mutual conflict, it means presenting regional resources to the economic interests of non-regional actors, not to the people of the region, as in Iraq, Syria, Libya and Egypt.

It is a fact that Oruç Reis' return certainly does not mean a retreat. On the contrary, it is to give the opportunity to benefit from the resources of the region within the framework of mutual equity in good relations with its neighbor. Otherwise, Turkey, which has more domestic and national defense industrial production than ever in the history of the Republic, is not a country that will hesitate to use the military action capability that it has kept alive for the last forty years in a situation where its interests have been violated, as it has clearly shown in Syria and Libya.

They also know that this is not a retreat. But it is a fact that a step had to be taken to prevent the provocation that was intended to be carried out through Greece.

The movie has not yet come to an end.

Wait for it, let's see how the main character will put an end to the movie.

More in this category: « What is Turkey’s Aim Israel-United Arab Emirates Normalization Agreement »
Login to post comments
back to top