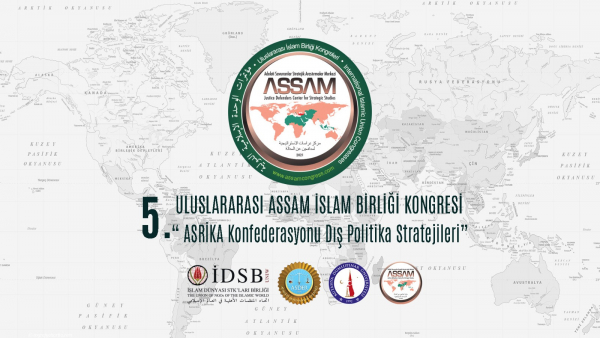 5th ASSAM International Islamic Union Congress was conducted between the dates of December 18-19. The 5th International ASSAM Islamic Union Congress with the main theme of “Determination of Principles and Procedures of Joint Justice System for the Islamic Union” (ASRICA Confederation Foreign Policy Strategies), 37 participants from 19 countries presented declarations to our congress, which was held under the leadership of ASSAM President Retired Brigadier General Adnan Tanrıverdi. Our congress, which is held in an international and interdisciplinary format, was broadcast live in 3 languages with simultaneous translations in Turkish, Arabic and English.

The 5th International ASSAM Islamic Union Congress, which started under the moderation of our ASSAM Vice President Ersan Ergür, started with the Qur’an Recitation by Ferruh Muştuer, the Imam of Hagia Sophia Mosque, in order to emphasize the opening of Istanbul and the Hagia Sophia Mosque, which is very important for the Islamic World. In the congress organized by Kütahya Dumlupınar University, UNIW, ASDER and ASSAM, after the opening speech of ASSAM President of the Board, Retd. General Adnan Tanrıverdi, President of Pakistan National Defense Commission Retd. General Senator Syed Mushahid Hussain pointed out that the alliance of Turkey, Pakistan and Azerbaijan in the Nagorno-Karabakh issue could form the basis of the Islamic Union. The Secretary General of the International Union of Muslim Scholars Prof. Dr. Ali al-Qaradaghi and the Rector of Yemen Iman University Prof. Dr. Abdulmecid Zindani made a greeting speech and touched upon the Principles of Foreign Policy.

that as a result of the studies, a model would be put forward with a declaration. It is to determine the PROCEDURES AND PRINCIPLES OF THE CONFEDERATION'S FOREIGN POLICY by analyzing the relations of the CONFEDERATION with its Neighbors and Global Powers, its rights and interests in the Neighboring Geographies, Inland Seas and Oceans, the Diplomatic network it will form among the States around the world, the Foreign Representation System in the Center, Federal Regions and National States.

Our congress recordings are available on YouTube and the links are below:

The main subjects of the “International ASSAM Islamic Union Congresses” series, which is envisaged to be held every year starting from 2017:

It will be ensured that the institutions required for the gathering of Islamic countries under one will and the legislation of these institutions will be revealed as a MODEL. In this respect, the next year's congress topic is planned as “Determination of Principles and Procedures of Joint Justice System for the Islamic Union” (2022).

ASSAM congresses will be completed by 2023, and as a result of these congresses, an exemplary solution proposal will be presented to the political will and decision makers on the way to the Islamic Union.