How Should Turkey's Road Map Through Azerbaijan Be? 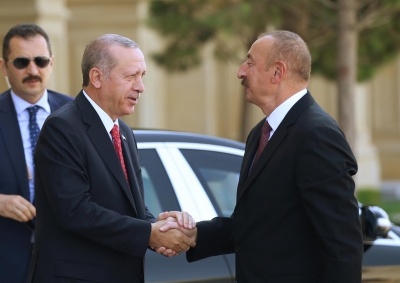 The Islamic geography, which was disbanded after the first World War, could not keep up with the era in self-recovery and development. t is a known fact that the basis of the sea supremacy established by the Genoese and Venetians, who had naval superiority in the Mediterranean, was the emergence of Grand Sailing Ships (Galleon) with smaller and faster galleys.

As a matter of fact, we have to say that the Ottoman Empire's loss of power against Europe was that it was unable to keep up with the time and developed new technologies, especially in the defense industry.

Although it did not occupy the Islamic Countries after the First World War, the West caused us to shed blood in the field of technology and industrialization by encouraging the rulers dependent on them to come to power. While they were dealing with positive science, they made us dependent on them through puppet administrators.

Even if our engineers who produced "Devrim (means Revolution)" car or names such as Vecihi Hürkuş, Nuri Killigil in our post-Republic Turkey wanted to make a little attempt, unfortunately, these breakthroughs were canceled after bureaucracy and assassinations.

Our national technology move, which started after the Cyprus Peace Operation, has reached a considerable position today. Although we see this in Syria and Libya, the world and the recruited minds within us saw it more clearly after the Azerbaijan-Armenia War.

Thanks to this power, Turkey was able to sit at a diplomatic table without Western states. This success set an example for the Central Asian Republics, which could not form their own strategy under the pressure of the Soviets.

Turkey should manage this diplomatic process as well as in the field and establish the road link bridge between Nakhichevan Azerbaijan as soon as possible. This should be the main strategy of Turkey, especially in the Nagorno-Karabakh region, and through this bridge Azerbaijan should determine the styles of state that will undertake the training and equipment of the armies of the Turkish republics in the region, with priority.

As in the case of deputation wars conducted around the world, Turkey should participate in the region through its private military companies in the legitimate circle and should not listen to the criticism of the internal opposition of the imperialism. The absence of Western countries, especially the United States and France, at the diplomatic table created after the Azerbaijan-Armenia war is a milestone and is a result that paves the way for Turkey.

Turkish-Russian rapprochement began in Syria, Turkey should evaluate the persistence here and in the region should carry out an effective alliance with Russia and permanent level. Russia is in need of Turkey's alliance in the Eastern Mediterranean energy field in the face of Western countries' efforts to get rid of dependence on Russian natural gas. These and similar strategies can be turned into advantages for Central Asia.

In the Nagorno-Karabakh raid done by Azerbaijan, we felt the drawbacks of both the people of the region and the Azerbaijani armed forces against the Russian military intervention. The existence of pro and anti-Russian political and bureaucratic supporters is a fact in the Turkic Republics. In fact, do not forget that the commander of the unit whom the Russian army sent to the Nagorno-Karabakh region as a peacekeeping force is a general who is stated to be a Muslim and Turkish origin.

Russia has carried out such a brainwashing activity that it defeated Chechnya not with its armed force but with its Chechen supporters. Where is Sheikh Shamil's Chechnya now? All central Asian countries can be compared like this.

All these show that the Turkish and Islamic nations are facing a very different type of war. The Ottoman Empire was subjected to a strategy that reflected ethnic, religious and cultural diversity, and thus, by providing a heterogeneous structure in sociological dimension, its ability to hold this identity diversity together was dulled. Western powers turned the dominance of the sociological domain to the Ottoman Empire in their favor, and in stages they carried out a sociological process management that gradually reflected this sociological process to the geography and then dragged them to demands for independence. The strategy is the same today. So much so that this strategy broke up Ottoman geopolitics yesterday. Today, they have targeted Turkish-Islamic geopolitics. Local organisms such as DAESH, FETO, and the PKK are the expansions of this strategy, and they grow on the sociological area we lost with our wrong education and culture policies. Turkey should be aware of this sociological strategy, revise all its policies according to the priority of sociological domain dominance, and spread sociological security-enhancing measures to the environment and region starting from the center. (For details, see Sosyolojik Savaş, 3. Basım, Yusuf Çağlayan-TİMAŞ. Pub.)

Turkey has the strength and power to make history and Turkey is on the verge of an opportunity. In this sense, the only step that will ensure an effective struggle in the region and the permanent establishment of the Turkish defense strategy should be the step to be taken in sociological terms. The name of this step in our literature is "Sociological War." The reversal of the Armenian population in Nagorno-Karabakh, which is around 30% compared to 70% Turkish population, as a requirement of the sociological war and the Turkish population falling into a minority from the Armenian population is a proof of this.

Turkey should be in the field not only with the tools and equipment of combat technology and defense systems, but also with the requirements of sociological war. For the return of the Turkish population which is forced to migrate in the region with rational steps should be well planned and economic and intellectual education investments also should be implemented carefully in order to equip this population with Turkish doctrine and thought system.

The West has designed the FETO terrorist elements in our country over the concept of sociological war. It rose to an effective and respected position with its educational and economic institutions. You know the rest of the story.

Now it is our era. In this context, Turkey should take the steps very carefully. Education and economic expeditions should be organized and an effective Turkish perception should be established in the region. The religion of Islam, which was forgotten under the pressure of Socialism in the region, should be revived and an operation should be made in the region with scholars with real science and knowledge. Sociological dynamics that will build Turkish-Islamic geopolitics should be activated on the field. Military power elements will be functional as much as they are integrated with sociological strategies.

The concept of Conquest followed by the Ottoman Empire, in which our centuries-old understanding of state tradition is wanted to be reset by severing our connection with our past, should be re-applied in the field. The necessary information and experience for this is available in our archives.

As long as we return to our origins and essence, we should implement strategies that will get rid of our perception of modernity where the way to reach civilization is through westernization.

This nation has made it many times in the past. There is no obstacle for us not to succeed in the future.

Because now the wind blows behind us, not across.

More in this category: « Azerbaijan-Armenia War: Victory or Defeat How does US propaganda become reality? »
Login to post comments
back to top