Should Religious People Be Afraid of Modernity? (September 17, 2013) 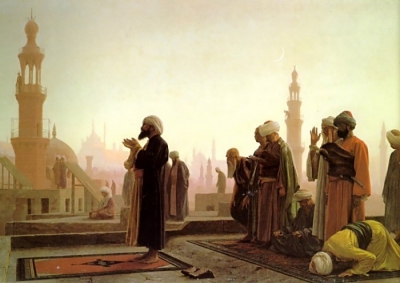 “Islam has the vitality and potential to surpass modernity. As long as we do not fall into oblivion to be caught by the wind of globalization instead of envisioning and building. For this, it is inevitable for the Muslim world to develop an alternative way, a methodology, a project. "

If modernity were a renewal of consciousness and if it contained human moral values; Of course, we would not have objected to the thesis “It is not right to place religiosity and modernity on two opposite poles”. The phenomenon of modernity is basically based on the philosophy of individualism and autonomous reason. Autonomous reason implies that the thinking capacity of human beings reconstructs social, economic and cultural areas according to their own comprehension. In Islamic literature, reason is a thinking ability that separates man from animal and makes him the supreme being in the world.

Before Allah created man, he declared the philosophy of why he would create man, and then coded the greatest miracle man to serve him, that is, he approved his own Lordship and shaped man. Consequently, without philosophy, no shape or thing can exist. This is the case from economy to morality, from architecture to music, in short, to the whole thing. In other words, the soul reflected in the existence of everything should logically reflect what it exists for. It is inevitable that the inventor's understanding, gaze and soul will recur.

EXISTENCE IS A RESULT

Modernity also embarked on the path of establishing itself from itself by bracketing all the foundations such as reason, tradition, revelation, and holiness in the journey it started with Descartes. The meaning of 'I think therefore I am' becomes clear here. In religious cultures, a person is based on the premise that 'there is God, therefore I am' when defining himself. In Descartes ' case, the perpetrator, who stands at the most basic, thinks, makes sense of what is above him.

The fact that Islamic societies try to defend their universal values based on revelation as 'tradition' or 'conservatism' on a modern ground means that they lost when they actually started to defend them.  In fact, it is essential that we develop and change our own methodology for delivering the message, not the unique concepts of religion's divine universal message. Our development of a language that will make us listened by the new generations, perhaps an understandable religious language instead of defending ourselves; we must develop the language of the Qur’an. The new generation has come to the world in the digital age; on the other hand, we met the digital age at our later ages. Therefore, if our children are "digital natives" and we are "digital immigrants", we must rediscover and reflect on ways and techniques to explain the basic principles of Monotheism to new generations. Because the Western intelligentsia maintains a great perception deformation and disinformation by increasing its speed and techniques. These projects continue to cause great erosions in young minds at the point of understanding the Qur'anic Islam and acquiring consciousness with approaches such as "Alliance of Civilizations", "Interfaith Dialogue" etc.

In essence, not Islam itself, but contemporary Islamic perception is largely metamorphosed from the devastating destruction of modernity, and by adapting it into the "Protestant Morality" in basic issues such as morality, art, holiness, economy, etc., global neo-liberal impositions are attempted to be transformed into a hedonist-secular form. It may be possible to free the sacred and love dimensions of religion from this existing understanding by creating a new philosophy of history from the past to the future, rather than blessing the past. Just as Islam has adapted to the Middle Ages and succeeded in transcending it, it has the vitality and potential to surpass modernity. As long as we do not fall into oblivion to be caught by the wind of globalization instead of constructing imagination. As Ludwig Wittgenstein said, "what is torn must remain torn.”

THE FOUNDATION OF RELIGION AND RELIGIOSITY

The modern world has broken the ground on which certain universal moral principles and values should be believed. Moreover, it did not offer good reason to believe in its principles and values. Modernity has built an understanding of knowledge that excludes the possibility of moral knowledge; In this understanding, moral values have become not a rational matter of belief, but a matter of subjective opinion. In a world opposed to belief and dogma, religion can only exist as a matter of personal morality or dogmatic opinion.

Max Weber's explanation of modernization on the basis of the concept of "rationalism" made the secular logic the dominant part of modernity. In this sense, thanks to the philosophical predictions of Luther and Calvin, Protestantization, in other words, secularization and capitalist understanding, while liberating religion from the monopoly of the church, at the same time pulled religion out of social life. In any case, this is not an odd situation or an illusion of perception. In every discipline of belief or ideology, it is inevitable that his interpretation of life reflects his moral and philosophy, which we can call his soul. In essence, Christianity is not in secular form; There are two Christianities in terms of Islam: The People of the Book Christianity and Western Christianity. When Christianity left Jerusalem, its birthplace, and settled in Rome, it became westernized and began to assume a secular form.

Although secularization may seem like a concept specific to the West or a concept belonging to Western Christianity in the first place, as a result of the expansionist policies of modernization, it has put the members of other religions under a total blockade. In Ivan Illich's words, modernity has become a universal religion, and the shrines of this religion are primarily educational institutions. Today, the results of the westernization movement, whose young minds, which are the dynamic values of society, have subjugated modernism in the name of laicism, are before our eyes. It has become almost impossible for society to even get religious education, which it cannot get from these modern schools, through the law. The religious groups who perceived private schools as a "salvation" at the beginning (as if they were unaware of the Unification of Education) were disappointed in raising a Muslim generation and had to surrender their children to modernism. Today, unfortunately, instead of saying "I will raise my children primarily as good Muslims", parents have highlighted their secular concerns and desires. In the simplest way, if we create a view from this perspective, we see that there is a lot to “fear and worry” about for the religious people.

At this point, the advocacy of the understanding of modernity has brought up another phenomenon: As a result of the reduction of religion to the individual, to the conscience of the individual and the loss of its place in social life, religion has been faced with the evolution of "Nihilism" (in terms of individualization) in terms of being religious.

The Lutheran view argues that the deeds of a sinful person have no effect on his forgiveness, and that forgiveness and reward will only be by the grace of God. In other words, the good or bad deeds you do in the world are not in the position of saving or not saving people; The belief that this happens only with the forgiveness of God shows that secularism tries to abolish the halal and forbidden by religion boundaries. As such, the religious perception of secularism has dominated the liberal-capitalist ideology, which does not recognize the halal-forbidden boundaries, within the framework of the "forgiveness doctrine" for the hereafter, instead of imprisoning God completely in the sky. Capitalist acquisition, a socially liberal way of life, as well as this modern way of life that is far from social morality, minimized to individuality and almost confines belief to a ceremonial perception, must be confronted urgently.

For example, the Islamic philosophy and moral system did not leave sharing and consumption at the sole discretion of the individual, and did not give that person the luxury of saying "I earn and live and spend as I wish". Islam never approves of this conformist understanding brought by modernity. Moreover, the discipline of Islam strongly condemns this approach. On the other hand, "shopping, consumption until death" is the product of the Western liberal-capitalist understanding. Deprived of the possibility of producing any other collective meaning in capitalism, modern man has been able to exist in relations with mass produced goods, not with God and people.

After all these analyzes and determinations, we can easily say the following: Are modernity and religiosity friendly concepts? Or are they distinct poles?

It is inevitable for the Muslim World to develop an alternative way, a methodology, a project, away from an eclectic and palliative approach to the attempt to rapidly transform and change (metamorphosis) whatever belongs to the sacred, in terms of its internal dynamics and the concerns we bear.

* This article is published in Yeni Şafak.

More in this category: « Israel-United Arab Emirates Normalization Agreement Why Should Turkey Set Up A Military Base In Libya? »
Login to post comments
back to top