Why Should Turkey Set Up A Military Base In Libya? 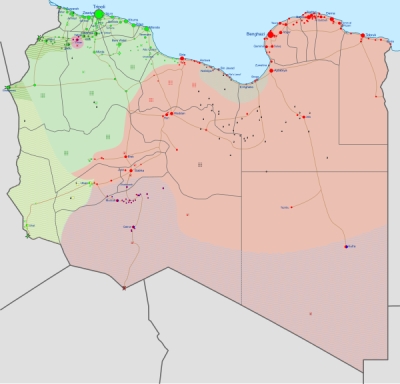 Cyprus was conquered by the Ottomans on 1 August 1571 during the reign of the 2nd Selim. At that time, the island was a base for attacks against Turkish ships operating between Istanbul, Syria and Egypt. It was essential to take Cyprus for control of regional trade.

According to US naval strategist Mahan's theory, “Maritime dominance must be established in order to control transcontinental trade." Mahan has also greatly influenced the development of the Naval Forces of Great Britain, Japan and Germany through the strategies he has put forward.

Based on this strategy, the West, which believes that the Mediterranean should be controlled for the control of trade that leads the world in the Asian, African and European Triangle, did not have any difficulty implementing this strategy.

According to the strategy of the Ottoman Captain Barbaros Hayrettin Pasha, who lived decades before Mahan, “Whoever dominates the Seas dominates the world”, which reveals the essence of Ottoman Maritime Affairs, imperialist Western countries seem to have made it easier for them to understand the importance of the island of Cyprus, which serves as a fixed aircraft carrier.

The Ottoman Empire, which controlled Mediterranean maritime trade with the conquest of Cyprus, not only controlled maritime trade, but also directed world politics through Asia, Africa and Europe.

The contribution of the island of Cyprus to Turkey as a military base is an indisputable fact. Today, this strategy is based on the fact that the Mediterranean hosts aircraft carriers of the main countries that drive the world economy.

If the security of the Eastern Mediterranean energy basin is added to this, it will help us understand how control of the region will affect the countries of the world in the future.

Forced to withdraw from its borders after the first World War, Turkey has made efforts to fix its devastated economy after a long war, but has stuck its head in the sand at the point of determining international policies with its strategy.

Turkey has forgotten The “Theory of Maritime domination” inherited by Barbaros Hayrettin Pasha centuries ago and has been slow to develop itself in this regard.

Especially after the July 15 coup attempt, the Turkish army, which survived its shackles attached to its feet, turned its eyes beyond borders to protect its country from terror and imperialist attacks.

Although it is a late strategy, we are facing a turkey that is conducting military operations beyond its borders and wants to control the security of the Eastern Mediterranean commercial and energy basin with bases it has started to establish outside the country despite its Western rivals.

As part of today's world energy wars, Turkey, which our Western competitors aim to exclude by using the Greek Administration of Southern Cyprus (GKRY) as a tongs, has wasted this global game with Libya and the “memorandum of understanding on the limitation of maritime jurisdictions signed on November 27”.

After this agreement with Libya, which is a gateway to Africa, the military training Union sent by Turkey has been a step that will change the balance in Libya and the region in every sense.

If Turkey wants to control eastern Mediterranean trade and protect its rights in the Eastern Mediterranean energy basin under international law, it must crown the military and naval reconciliation agreements it has developed with Libya with a base it will establish there.

If the step that Turkey will take in this context jumps to other coastal countries after Libya, the Eastern Mediterranean will become a Muslim lake again. In this way, the resources of the region, which were exploited in the last century, especially in Africa, can be re-provided to the people of the region.

Yes, Turkey has rights in this region before countries deployed to the island of Cyprus, which comes with aircraft carriers from miles away and is in a fixed aircraft carrier position on top of it.

A base to be established in Libya will be the source of a new Turkish wind.

More in this category: « Should Religious People Be Afraid of Modernity? (September 17, 2013) Why Are They Bothered of Turkey and Erdoğan? (June 22, 2013) »
Login to post comments
back to top