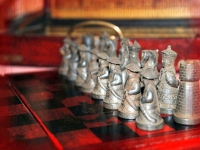 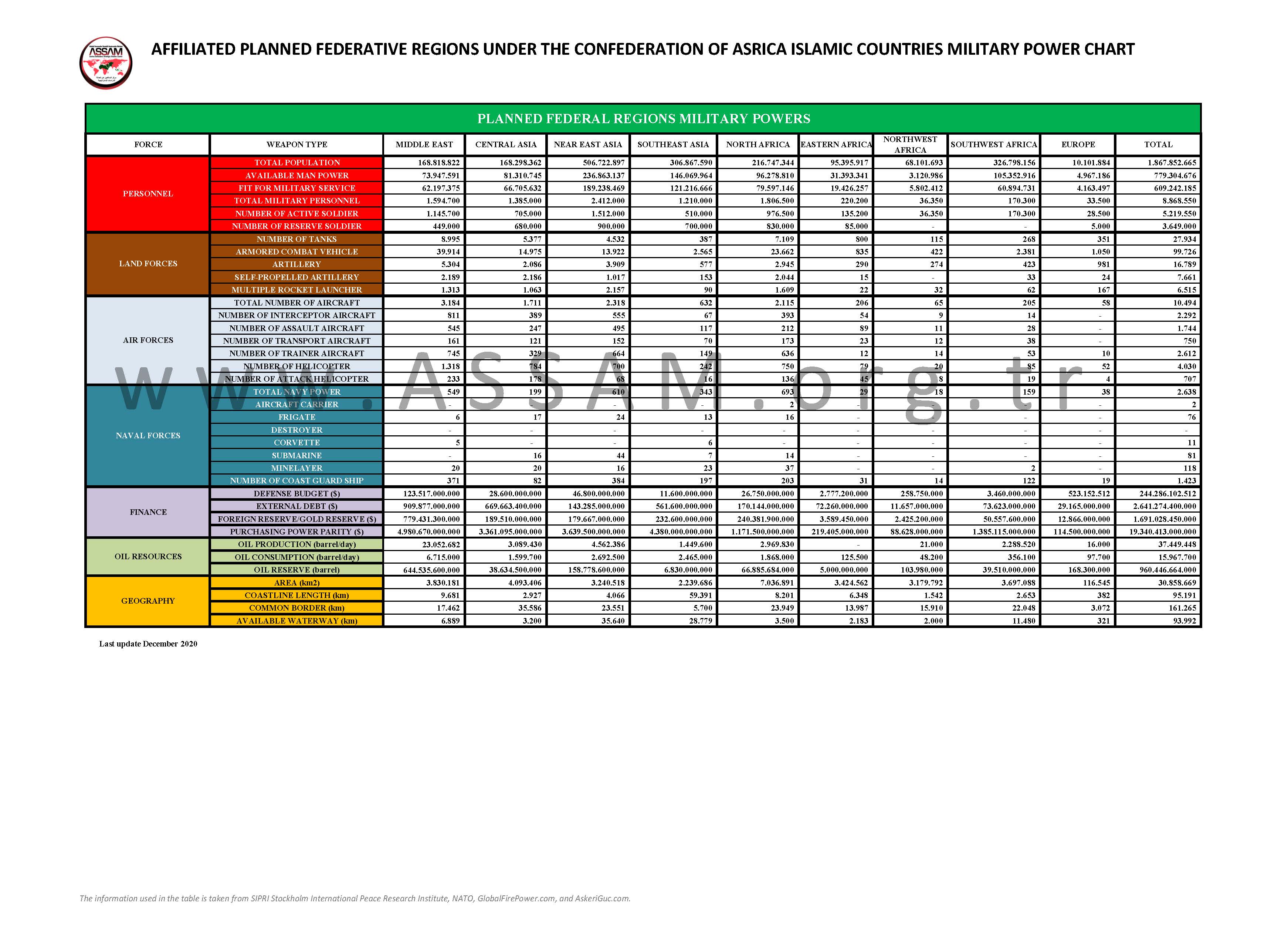 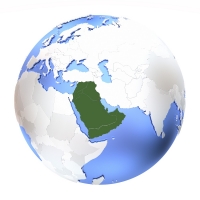 Examination and Research of Muslim Countries In the Middle East

Military Power Chart of Islamic Countries In The Middle East 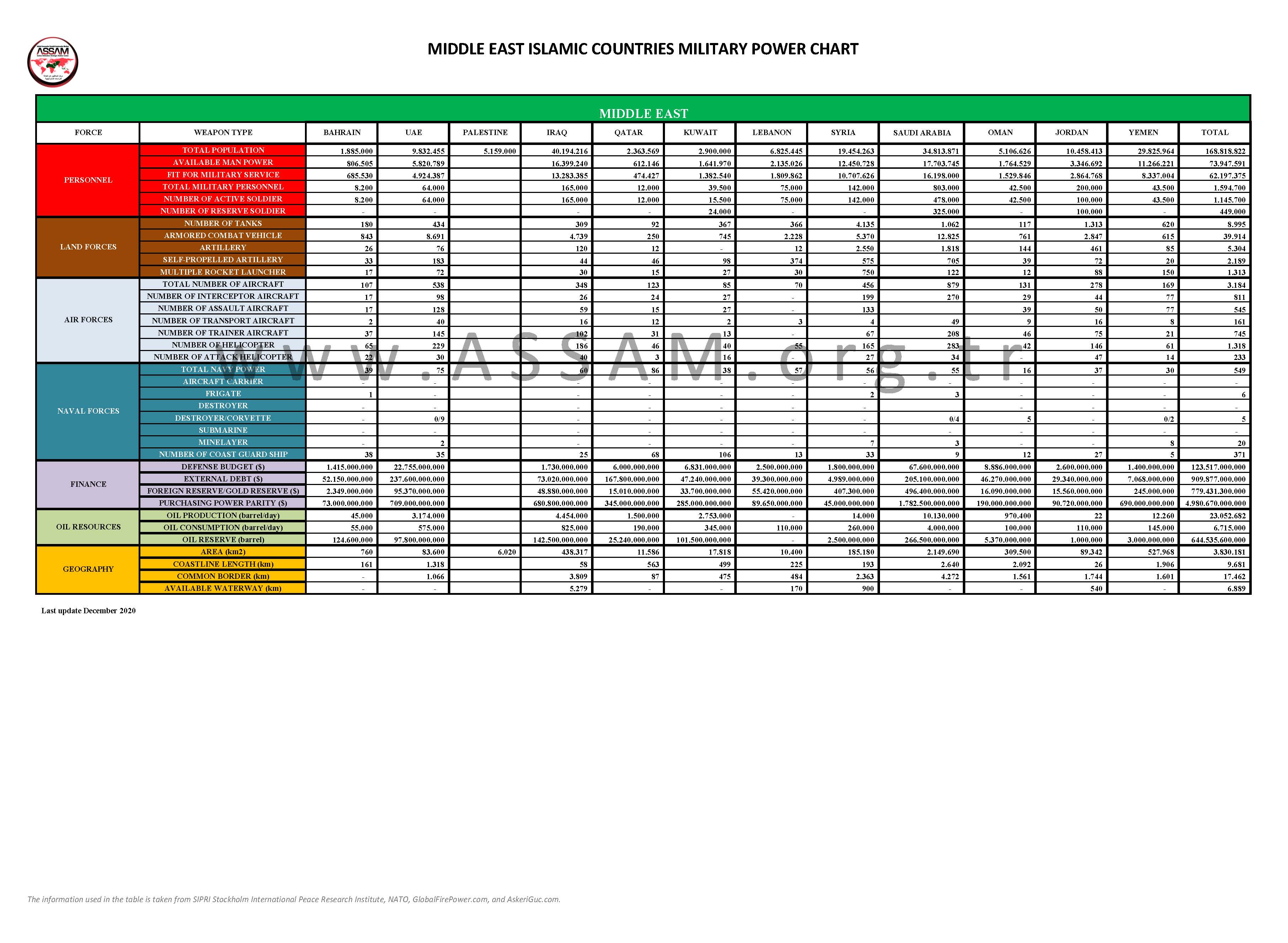 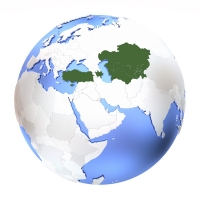 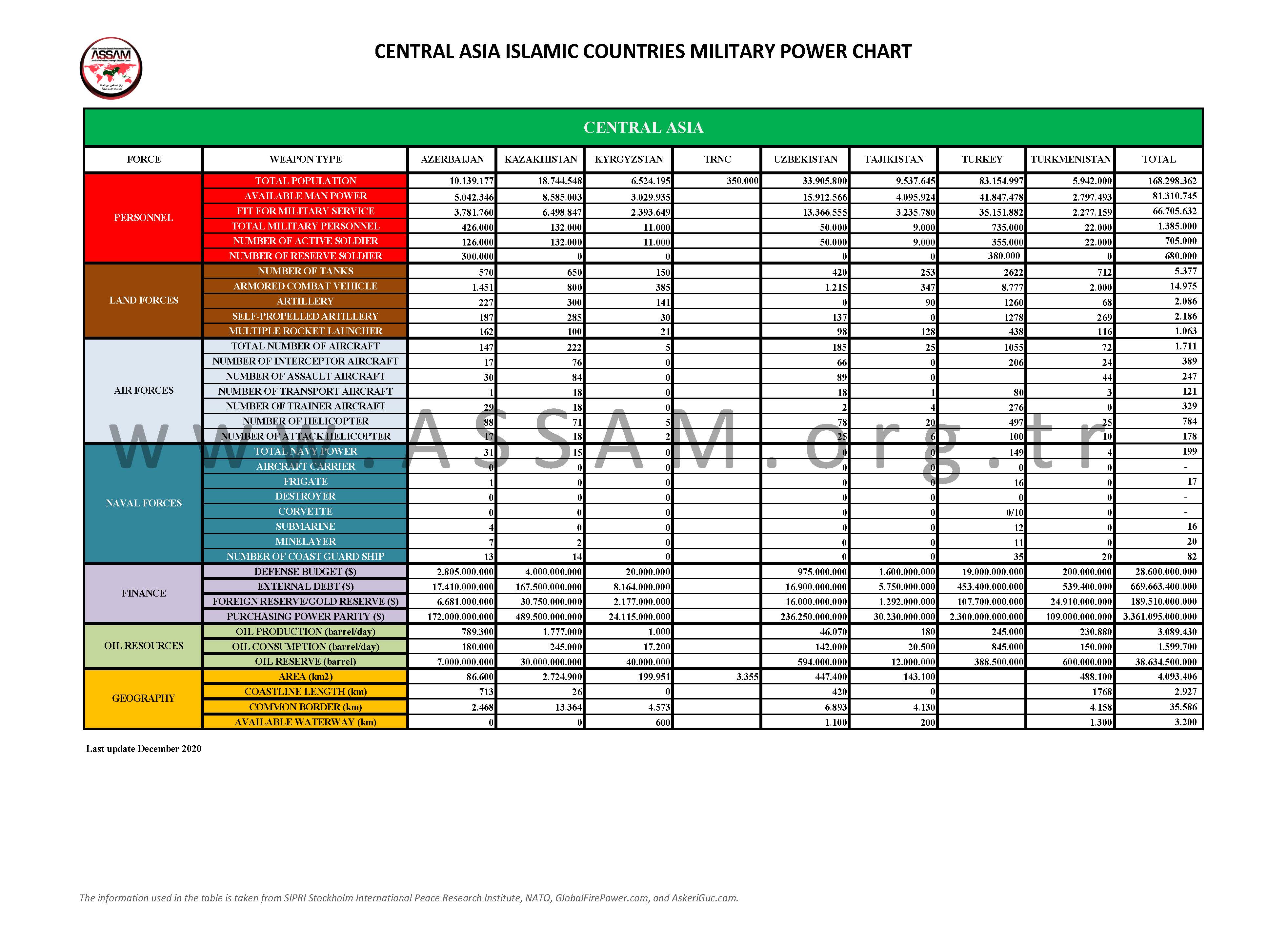 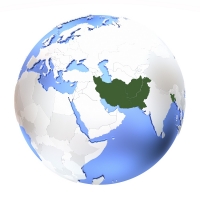 Examination and Research of Near Eastern Muslim Countries

List of Military Forces of Islamic Countries In The Near East 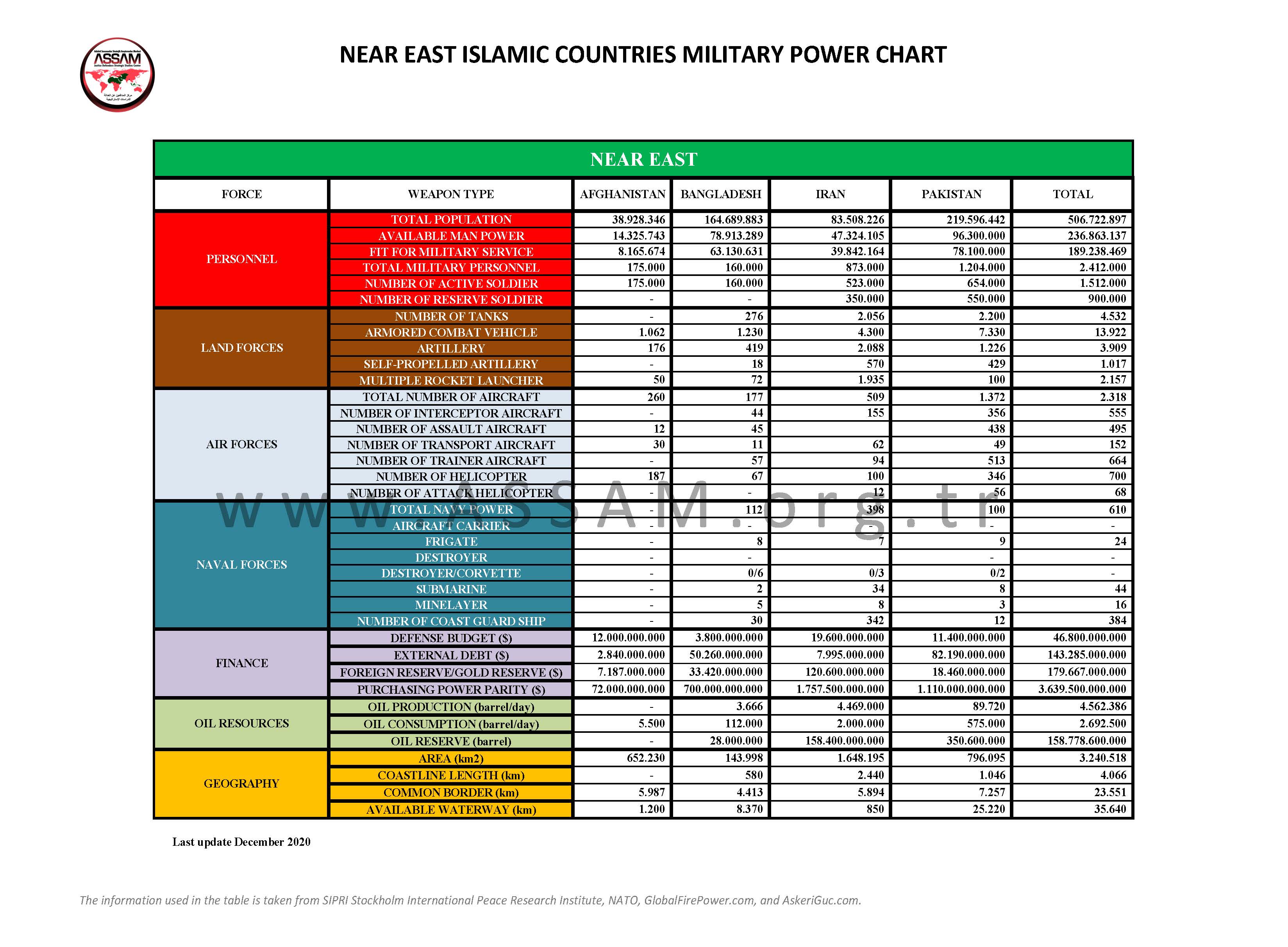 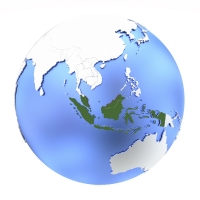 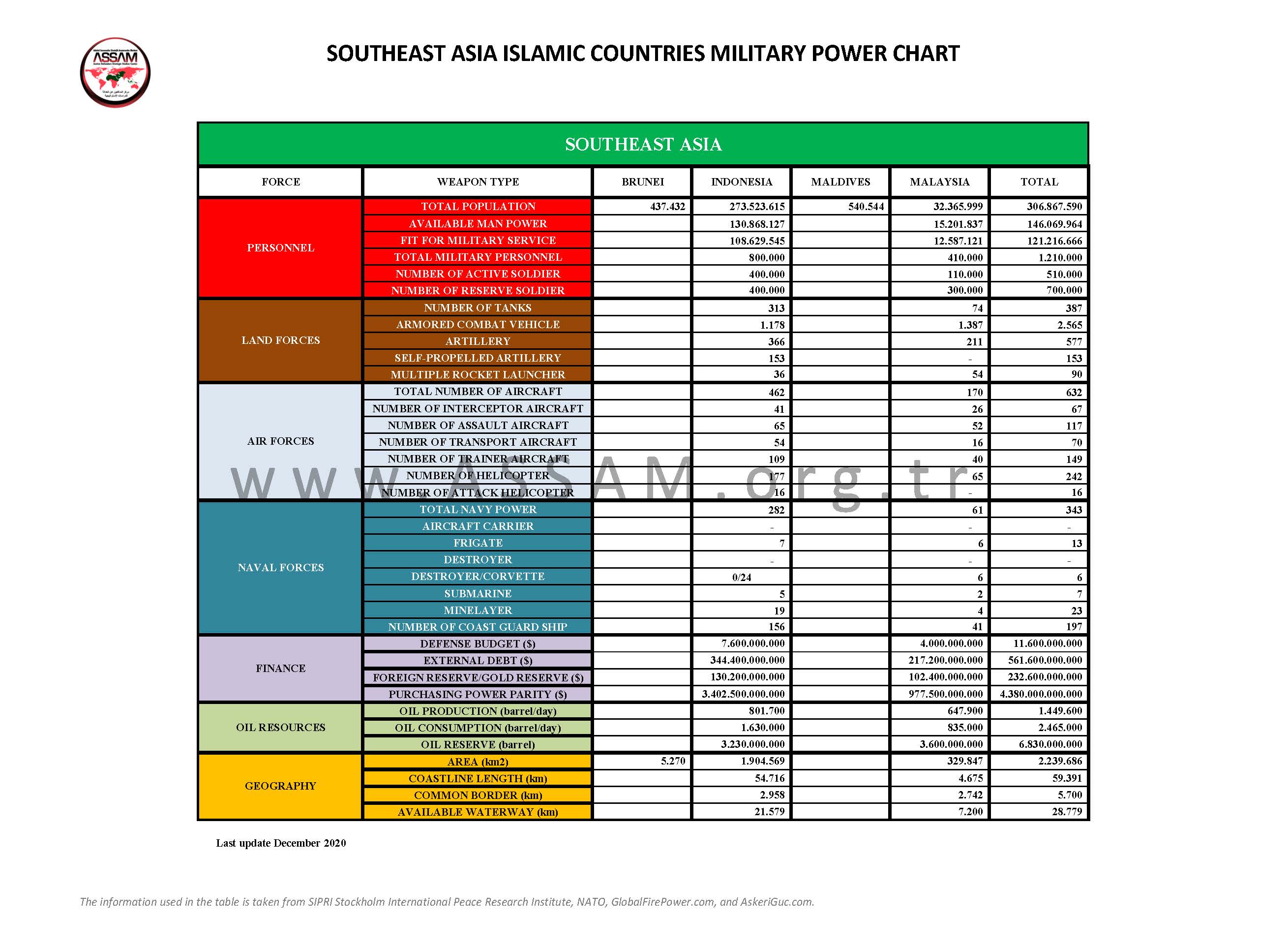 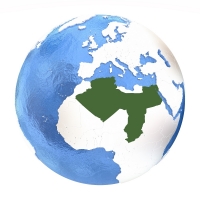 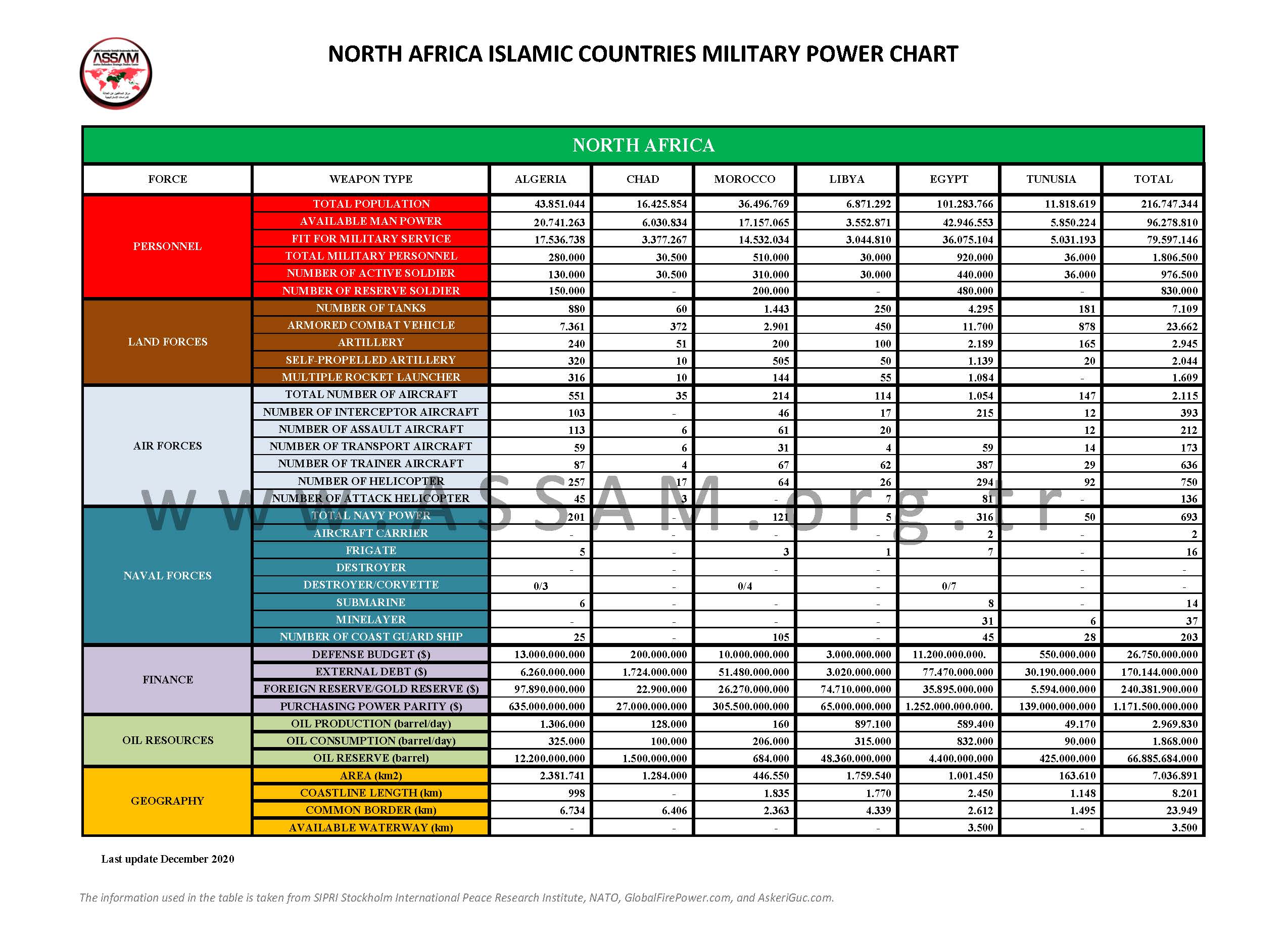 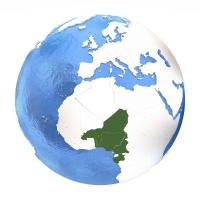 List Of Military Forces of The Islamic Countries of Southwest Africa 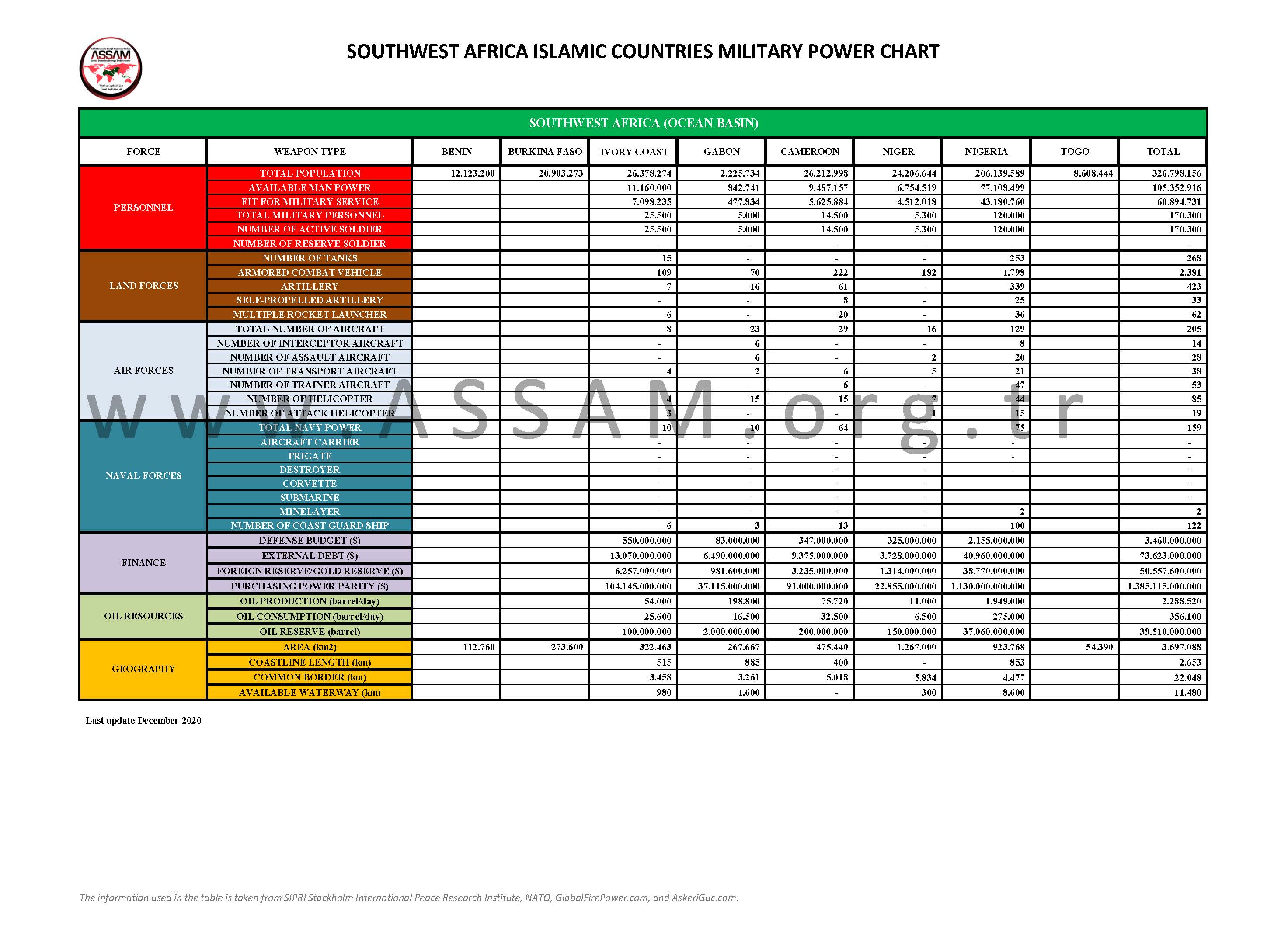 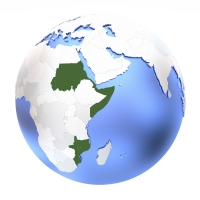 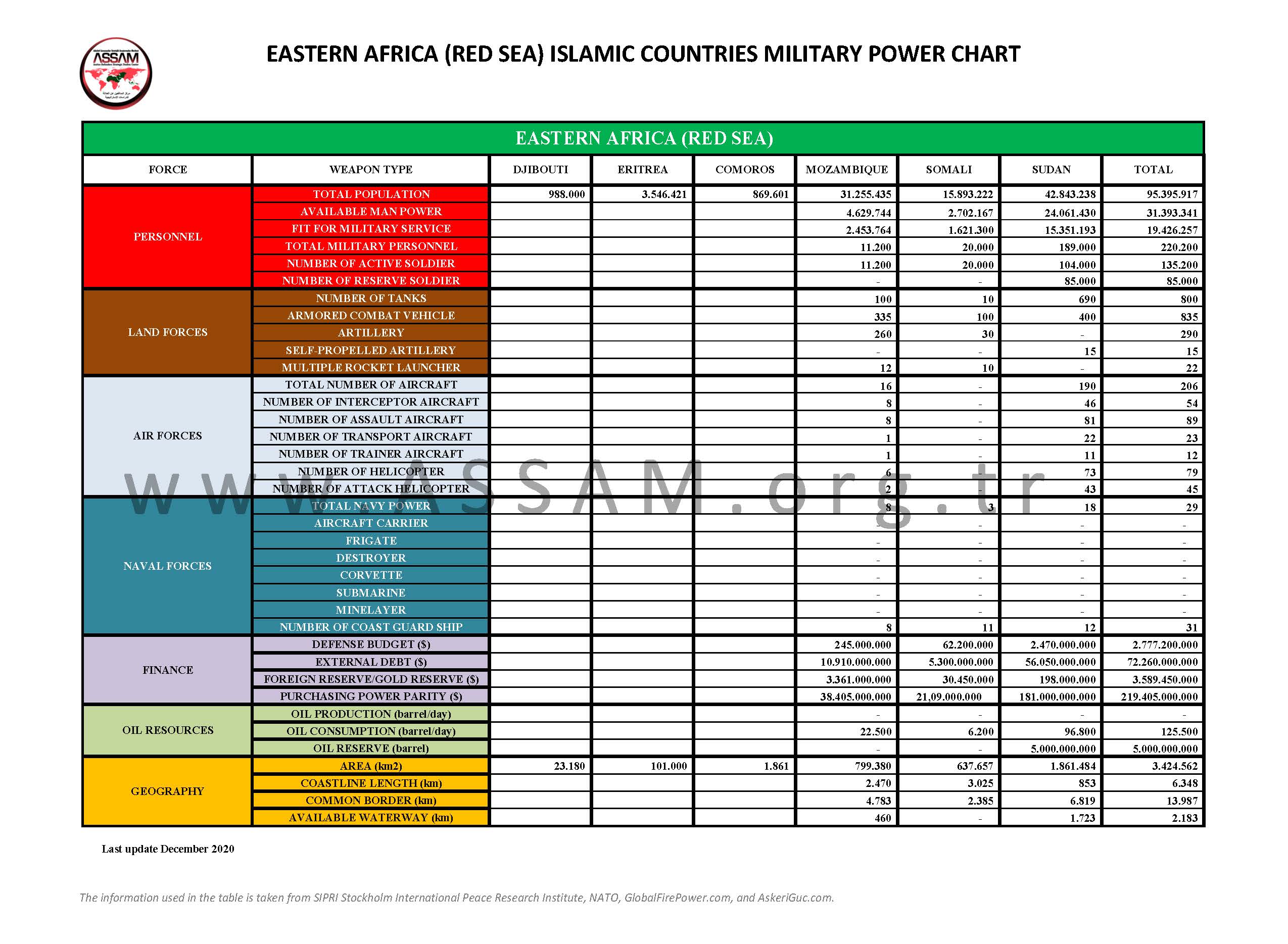 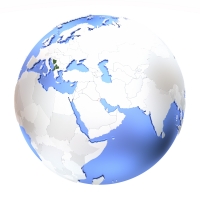 List of Military Forces of Islamic Countries In Europe 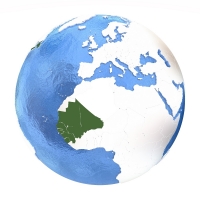 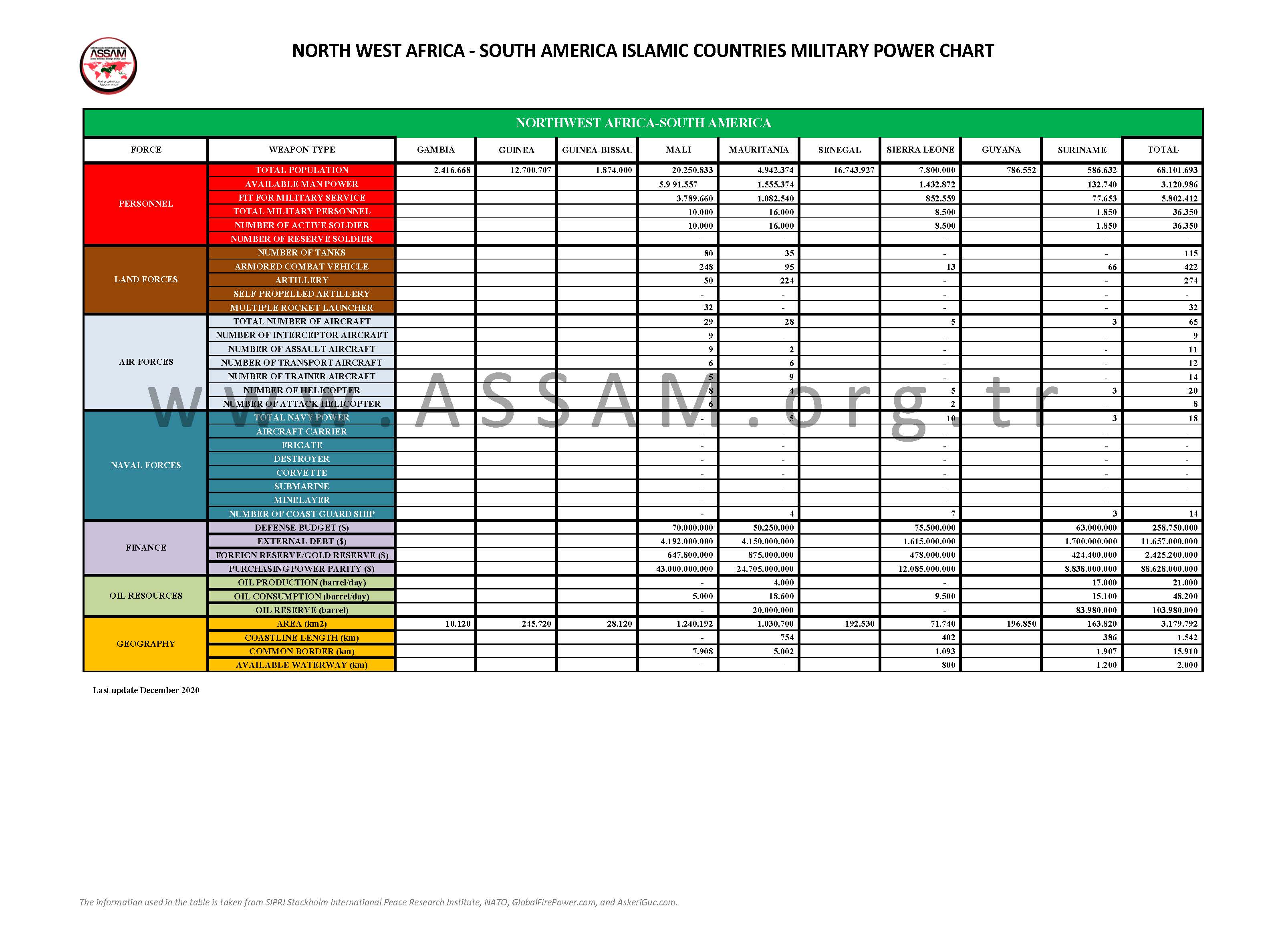 Written by A. Galip GÜMÜŞDERE
Rate this item
(0 votes) 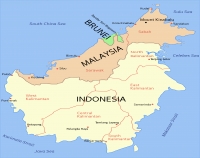 Over the island of Borneo, an island of unshared riches divided into three by British and Dutch colonists, and a Muslim homeland; the state of Brunei, the states of Malaysia, the future Indonesian capital, and Philippine claims

Niger is a landlocked Sub-Saharan African country. Algeria, Benin, Burkina Faso, Chad, Libya and Mali are neighbors of Niger, which has area of 1.27 million square kilometers. The distance to the nearest seaport is around 1000 km. 80% of the country is covered with deserts and a small part in the south can be considered steppe.

In the early 1990s, the western world brought its mercenaries to Iraq on bail from a private military company. Western states have been using Legionaries since medieval ages to maintain the exploitation order in the Middle East, especially in Africa. When mercenary groups charged with preventing Iraq from procuring the stability of Iraq, which were divided into three due to internal unrest when people started to suffer from human resources, Al-Qaeda was invented and it became a new and very cheap mercenary source based on the ideological base of Muslims from Islamic countries. When the al-Qaeda ideology was insufficient after Syria was messed with chaos, ISIS was invented and put on the ground to create new resources. Today, with Turkey's effective fight, Al Qaeda and ISIS had been ended in the region. In Africa, organizations like Boko Haram continue their activity. When the west financing terrorism and some of the Gulf countries under its guidance had difficulty could not afford to stand against the Turkish Armed Forces and returned to their country in the coffin, and even sometimes did not return, they became have to use mercenaries from Russia with a new organization and use them in Syria.

First to Turkish Justice, Then to Divine Justice

In the early 90s, the CIA-NATO gang convinced the Laicistic-Secular segment in Turkey that it was time to “ban all symbols that evoke Islam and stop Muslims from taking part in public offices” in the public opinion, as part of the Moderate Islam Project.[i]

Thus, they would hit two birds with one stone;

While the postmodern coup, briefly known as 28 February, caused serious traumas to the religious people, it did not take long for the Laicistic-Secular people to wake up from the euphoria of victory. They started to be evicted from the Turkish Armed Forces by FETO with trials such as Sledgehammer and Ergenekon. In other words, the snake they had grown started to bite them too.

The Laicistic-Secular community, which has always been hostile to religion and religious people, has never been able to realize that the religious people, who constitute the majority of the citizens of the Republic of Turkey, do not have enmity towards them.

Although it is an unfamiliar word for new generation, our generation knows very well what is tried to be told when it comes to Malta.

In Malta prisons, it is used to mean the prison yard with a ceiling surrounded by walls and sky where prisoners go out and pace at certain hours.

Turkey Made Its Choice

Turkey held its President and Parliamentary elections on Sunday, June 24, 2018. I wish the election results auspicious.

The result of the election had appeared in the polls weeks earlier. Our noble nation gave a very important message in the June 24 elections.

When asked about the reasons for preference in the pre-election polls, our people mention many revolutionary investments; tremendous innovations in the healthcare system, investments in the education system, technological progress and the free availability of books in primary and secondary education, with investments made in transportation Yavuz Sultan Selim Bridge, Eurasia Tunnel, Osman Gazi Bridge, New Istanbul Airport, Çanakkale 1915 Bridge, highways, dual carriageways and high-speed trains.

Although this is the view from the inside, there is something completely different when looking at Turkey from the outside;

‘One minute!' to America from Ummah

The upright stance of the 48 Islamic countries those took action in favor of Jerusalem, neutralized the US in the Middle East and also on the Palestinian issue. Due to being unable to find support on the international scene Trump sentenced to loneliness.

This email address is being protected from spambots. You need JavaScript enabled to view it.

While the date for local elections is approaching which will be held on 30th March 2014, an investigation was started by the Public Prosecutor on 17th December 2013.  Although this investigation was seen as an initiative to wear down the government by the members of the cabinet, the opposition parties, some media groups and non-governmental organizations classified it as corruption and bribery. In this investigation, many people consist of statesman, bureaucrats, bank managers, public officials and sons of ministers were taken in custody on charges ranging from taking bribes, rigging bids on government contracts to attempting to smuggle.

There have been significant social, political and economic impacts of this corruption probes to Turkey. On the one hand, opposition parties and some media and press groups have asserted the failure of the government. However, the government has claimed that these operations were launched to overthrow themselves. After 17th December, several consequences were seen: social polarization was increased, some resignations were occurred in the ruling Justice and Development Party, BIST fell down, a sharp rise in the prices of Dollar, Euro and gold emerged, and Turkey Republic Central Bank Monetary Policy Committee increased the interest rates more than expected.

In this study, it has been examined that what kind of changes on social, economic and political basis have been brought to our country by 17th December operation.

Within this study, understandings of nation in Islamic civilization and “modern-secular” Western civilization are compared both with each other and on socio-political structures. These comparisons should be useful to know what is appropriate for Turkey.
Under the influence of the French Revolution, the “nation” became a new socio-political force in Europe. In the studies carried out to define the nation, the ideas of philosophers were used, not sociological observations. There was no consensus on any of the very different definitions produced on unrelated grounds such as race, native language and citizenship. Meanwhile, instead of accepting historical integrations, each state tried to build its own nation by choosing one of the definitions made. Thus, although they were known as “nation-states”, none of the states belonged to a clearly definable nation, and it was not possible for a state to artificially build its own nation. In the meantime, many states were fell apart, while the newly established ones faced the same danger.
On the other hand, the concept of nation in Islamic civilization has existed since the beginning and its meaning is clear. As a term found in the Qur'an, 'nation' refers to a religion and its believers. In the early periods, the common language of the “Nation of Islam” was only Arabic. In the course of time, Persian and Turkish also became common languages in different regions. Thus, the term “Turk” became the name of Muslims of different ethnic origins and different native languages who used Turkish as a common language.
Later, with the modern-secular definitions of the West, the definitions of “Turkish nation” became unclear and controversial in Turkey, and the integrity of the Turkish nation was in danger of being disintegrated.

This article is published in the first issue of ASSAM International Refereed Journal.